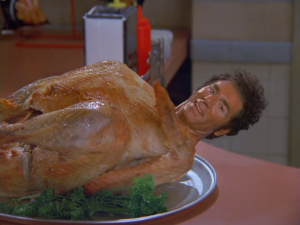 Kramer begins shaving with butter, and the scent overwhelms Newman. George fakes a handicap to land a job at Play Now. Jerry resents Bania for riding his coattails. Elaine and Puddy break up and get back together numerous times on a flight back from Europe. Gordon Jump guest stars.

Jerry’s Apartment
Jerry finds out Bania has been given the spot after him at a comedy showcase, so he decides to throw his set to leave Bania to his own devices. George scores an interview with Play Now, and exploits his limp into a full-fledged scooter. Kramer decides he needs a closer shave, so turns to…butter.

Monk’s Café
Upon running out of his own butter at home to lather and shave with, Kramer gets a giant tub of butter from the coffee shop. Jerry discovers that Bania is again riding his coattails, this time with his ex Jenna.

NETHERLANDS (map)
George and Jerry argue over whether the country is called the Netherlands or Holland (Holland is a region of the Netherlands), trying to figure out who the Dutch are.

BELGIUM (map)
When asking about Holland, Jerry tells George that it is a country right next to Belgium.

Catch A Rising Star (NOW CLOSED)
253 W. 28th St., New York, NEW YORK (map)
nearest subway: 28th Street (6)
Jerry gets offered a showcase by NBC, only to have his laughs “eaten” by Bania. Jerry later takes part in a showcase before Bania, purposely throwing his set, before Newman and Kramer bring the crowd back for Bania’s set when Newman attacks a “delicious”-looking Kramer. Catch A Rising Star moved to this location in the late 1990s from 1487 First Ave., as shown in “The Movie.“

deli
New York, NEW YORK
In a deleted scene, Jerry gets lox wings specially prepared for him at the deli, but is once again followed by Bania, this time in the deli line, who gets the same special wings offer as well, much to Jerry’s chagrin.

Oslo, NORWAY (map)
Elaine and Puddy return from a European vacation from Oslo, where they constantly break up and get back together throughout the flight. Puddy discusses his fascination with Norwegian currency (the kroner) in a taxi to the airport.

Gap
Rome, Lazio, ITALY (map)
Elaine and Puddy argue about their European vacation: “What do you think the Gap in Rome has that’s not at the Gap on Broadway?” The Gap did not open its first store in Rome until July 2011, at Via del Corso, 471-3, 14 years after “The Butter Shave” first aired.

Gap (now Banana Republic)
2373 Broadway, New York, NEW YORK (map)
nearest subway: 86th Street (1)
Puddy, arguing with Elaine over their European vacation, questions “what do you think the Gap in Rome has that’s not at the Gap on Broadway?” The closest Gap to Elaine’s Apartment was at this location.

Oslo Airport, Fornebu (NOW CLOSED)
Forneburingen, Bærum, NORWAY (map)
Elaine and Puddy fly back (22 hours with stopovers) from Oslo to New York; a direct flight is typically only 8 hours, but can run up to 20 hours with stopovers, typically in Helsinki, Amsterdam or London. Fornebu was Oslo’s main commuter airport until it was replaced by Oslo Airport Gardermoen in 1998.

Play Now (NOT REAL)
New York, NEW YORK
George lands a new job due to his “handicap,” fully exploiting his handicapped bathroom, complimentary scooter and free assistance from fellow coworkers, until he is exposed by a fraud.

Kramer’s Apartment
Newman helps Kramer stay simmering and moist in his hot tub, but the smell (and the fact Newman is reading “Alive” by Piers Paul Read) make Newman flee for fear he will act on his temptation.

MONTANA (map)
A poster for Montana and Wyoming is seen behind Kramer’s hot tub, while Newman helps him stay simmering and “juicy.”

WYOMING (map)
A poster for Montana and Wyoming is seen behind Kramer’s hot tub, while Newman helps him stay simmering and “juicy.”

airport
Queens, NEW YORK (map)
Elaine, Puddy and “Vegetable Lasagna” are forced to share a cab from the airport after a 22-hour flight together, due to a cab shortage.

Elaine’s Apartment
Elaine requests a cab to 86th and Broadway from the airport, but is forced to share…with both Puddy and “Vegetable Lasagna.”