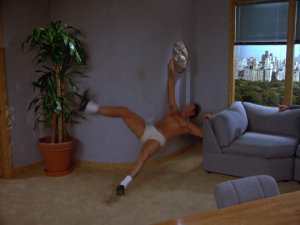 Jerry has to convince his girlfriend that he “did not pick” while Elaine suffers the fallout of sending a nipple-exposing Christmas card. Kramer becomes a Calvin Klein model.

Jerry’s Apartment
Elaine is horrified to discover her nipple is showing in her Christmas card Kramer shot for her, George pines over losing Susan, and Kramer catches Jerry’s girlfriend Tia wearing “Ocean,” a rip-off fragrance of his “Beach” idea.

Monk’s Café
George begs Susan to take him back, saying he has changed (and inadvertently calling her a soft-boiled egg). George later tells Jerry about how, upon regretting his decision, he turned to “the pick” to get out of the relationship.

George’s Apartment
George claims that now that he is alone after Susan, he will spend his days in his disgusting apartment eating Chinese takeout in dirty laundry.

Susan’s Apartment
New York, NEW YORK
Jerry reminds George he once said going up the stairs to Susan’s was like being taken to a cell, to which George claims he would do anything to be going up those stairs again. George also mentions how her apartment was always so clean…”she was so sanitary.”

Kramer’s Apartment
Kramer takes Elaine to his apartment to shoot her Christmas card photo…which ends up revealing a nipple.

Dana Foley’s office
New York, NEW YORK
George goes in for his first session with a therapist, Dana Foley, to try and help him get over Susan…but they end up spending the session trying to undo a stuck zipper on George’s jacket.

Cathedral Of St. John The Divine
1047 Amsterdam Ave., New York, NEW YORK (map)
nearest subway: Cathedral Parkway (1)
Elaine mentions she and Fred are planning on doing volunteer work here for the church. Jerry’s response on volunteering: “that’s the true spirit of the holiday season – people being helped by people other than me.”

Elaine’s Apartment
Elaine mentions she sent a Christmas card with her nipple showing to the superintendent of her building.

“The Pick” location
New York, NEW YORK
Jerry is spotted by Tia, in the neighboring taxi, in what she suspects is a pick when stopped at a red light.

Sinai Desert, EGYPT (map)
George bets Jerry that Moses was a “picker,” having to wander the Sinai Desert in the dry air for 40 years: “You’re telling me you’re not going to occasionally have to clean house a little?”

Pendant Publishing
Elaine is tortured at the office, being nicknamed “Nips” at work, her sister Gail screaming at her over the phone, and Fred eventually dumping her, all over her nipple showing in her Christmas card.