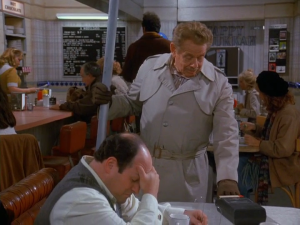 Everyone celebrates Festivus with the Costanzas. George invents the “Human Fund.” Kramer goes back to work at H&H Bagels, ending a 12-year strike. Elaine gives a fake phone number to a suitor in a denim vest. Jerry dates a “two-face.”

Jerry’s Apartment
Jerry tells Kramer about Festivus, intriguing Kramer, who also announces his 12-year strike at H&H Bagels is over. George devises a plan to give out fake-charity gifts to his coworkers for Christmas, while Elaine devises a plan to get her Atomic Sub card back.

Monk’s Café
The gang discovers George’s “heritage” when Elaine finds a Festivus card for George, after which Frank enters Monk’s to formally invite George for Festivus. Jerry attempts to take his girlfriend Gwen only to the coffee shop, as she is a “two-face” who seemingly only looks good in the light of Monk’s back booth.

Yankee Stadium
George claims that thanks to his good rapport with the grounds crew, he was still able to get Dr. Whatley Yankee tickets as a Hanukkah present.

Kruger Industrial Smoothing (NOT REAL)
101 Park Ave., New York, NEW YORK (map)
nearest subway: Grand Central – 42nd Street (4,5,6,7)
George, after getting a number of charitable gifts, hands out fake donations to “The Human Fund” as Christmas gifts to his coworkers, but the scam is exposed when he is given a $20,000 donation from the company to the fund. George claims that Kruger’s motto is “we don’t care, and it shows.”

The Children’s Alliance (NOT REAL)
New York, NEW YORK
Tim Whatley gives George a donation as a Christmas gift, upsetting George to no end (“where’s his Christmas spirit?!?”). There is an actual Alliance For Children at 58 W. 58th St., as well as the Manhattan Child Advocacy Center, part of the National Children’s Alliance, at 1753 Park Ave.

Atomic Sub (NOT REAL)
New York, NEW YORK
Elaine tries to become a submarine “captain” by eating her 23rd crappy sub in exchange for a free sub, and ends up on a wild goose chase to track down the card when she accidentally gives away her number on it.

H&H Bagels (NOW CLOSED)
2239 Broadway, New York, NEW YORK (map)
nearest subway: 79th Street (1)
Kramer discovers his strike at H&H is over after 12 long years, prompting for him to return to work as a “Bagel Technician.” Kramer goes on strike again when he can’t get Festivus off, but returns when he needs to use the bathroom. He’s eventually fired for accidentally dropping gum into the dough, and then continuing to mix it. The original location (featured in this episode) closed in 2011, but a new Upper West Side location has since opened at 526 Columbus Ave.

tunnel
New York, NEW YORK
After picking up Gwen in his taxi Gwen suggests the driver take “the tunnel,” where her “two-face” is exposed in the tunnel’s dim lighting.

Bayside, Queens, NEW YORK (map)
George claims to Mr. Kruger that due to the persecution against Festivus, “they drove my family out of Bayside!”