February 2, 2014 Comedians In Cars Getting Coffee Leave a comment 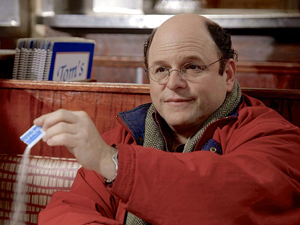 The halftime of Super Bowl XLVIII profiled “two regular New Yorkers” taking in the game in New York: Jerry Seinfeld, and his “best friend for almost every single day of the 1990s,” George Costanza, as part of his series “Comedians In Cars Getting Coffee.” Jerry takes George out in a 1976 AMC Pacer: “it doesn’t work, it looks ridiculous, and falls apart – which makes it the perfect car for Mr. George Costanza.”

Jerry’s Apartment
Jerry and George step out of the apartment for a quick coffee (the apartment, however, remains unseen), where George criticizes Jerry for not putting out his favorite curly chips (Jerry: “I’m sick of the curly chip!”).

Monk’s Café
Jerry and George go for a halftime cup of coffee (at the REAL New York location of Tom’s), where George discovers that Jerry invited George over for the game only because George’s prior “over-cheering” got them banned from a legitimate Super Bowl party. The Pacer later stalls outside the coffee shop, leaving them stranded in the snow.

New Jersey Turnpike, Exit 14
Newark, NEW JERSEY (map)
Jerry is seen driving down the Turnpike in the rain into New York City, in his AMC Pacer, on his way to pick up George.

MetLife Stadium
1 MetLife Stadium Dr., East Rutherford, NEW JERSEY (map)
When George comments how he can’t believe that the Super Bowl is in New York, Jerry angrily replies, saying “well, they gotta have it somewhere!” The Seattle Seahawks ended up defeating the Denver Broncos 43-8 at MetLife.

Amigos Mexican Bar & Restaurant (NOW CLOSED)
2888 Broadway, New York, NEW YORK (map)
nearest subway: 116th Street – Columbia University (1)
Jerry claims he wants to try a different place from the coffee shop, where they put cinnamon on tuna; “Is cinnamon ever bad? Cinnamon enhances everything!” However, they show up when the restaurant is closed for the game, and are forced to head to the coffee shop instead.

The Wasserstein’s
New York, NEW YORK
Jerry confesses to George that he was invited to the Wasserstein’s to watch the Super Bowl, but turned it down as George was shunned due to his behaviour two years earlier, partially for “over-cheering,” but in particular for “availing himself of the toilet in their master bedroom.” George later tells Jerry to leave for the second half, before he discovers Newman is a guest of the party.

Lucas Oil Stadium
500 S. Capitol Ave., Indianapolis, INDIANA (map)
George discovers he was uninvited from the Wasserstein’s Super Bowl party, after his “over-cheering” for the Giants in Super Bowl XLVI ruined the whole party (“It was the Giants! What was I supposed to do, I cheered!”). The Giants defeated the New England Patriots here 21-17 on February 5, 2012.