December 21, 2016 Comedians In Cars Getting Coffee Leave a comment 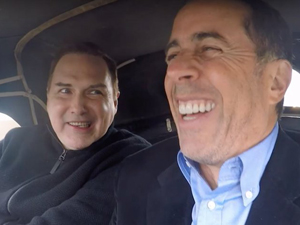 The Hollywood Roosevelt Hotel
7000 Hollywood Blvd., Los Angeles, CALIFORNIA (map)
“The Volvo-ness”
Jerry picks up Kristen at her hotel, stunning her not just with the Volvo’s look and feel, but even the very sound of the door opening and closing.

Skylight Books
1818 N. Vermont Ave., Los Angeles, CALIFORNIA (map)
“The Volvo-ness”
Kristen encourages Jerry to stop in, to smell the books and tell the story of how she joined the Groundlings.

House Of Pies
1869 N. Vermont Ave., Los Angeles, CALIFORNIA (map)
“The Volvo-ness”
Jerry stops in for coffee, brunch, and of course pie (but no doughnuts!) with Saturday Night Live alum and Bridesmaids star Kristen Wiig in a 1964 Volvo 122S Amazon, discussing (among other things) the Golden Globes, The Matrix, cell phones and birthday doughnuts.

Steven Alan Outpost (NOW CLOSED)
1937 1/2 Hillhurst Ave., Los Angeles, CALIFORNIA (map)
“The Volvo-ness”
Jerry and Kristen stop to try on glasses, where Jerry admonishes the saleswoman for lying to him in order to close a sale.

Jeni’s Ice Creams
1954 Hillhurst Ave., Los Angeles, CALIFORNIA (map)
“The Volvo-ness”
Jerry insists on seeing the interior of this ice cream store, nearly getting hit by a pickup truck before getting ice cream and signing autographs.
↑ return to Top

New York Marriott Downtown
85 West St., New York, NEW YORK (map)
nearest subway: Rector Street (N,R,W)
“A Rusty Car In The Rain”
Jerry picks up Norm from the back entrance of his hotel, next to Bill’s Bar & Burger, for their ride out to Queens.

Lotte New York Palace
455 Madison Ave., New York, NEW YORK (map)
nearest subway: 51st Street (4,6)
“Dictators, Comics And Preachers”
Jerry picks up Cedric at his hotel, where he leaves the premises with a hotel robe, to check out the car (and a large crowd gathering) next door at the Trunk Club.

The Butcher’s Daughter
581 Hudson St., New York, NEW YORK (map)
nearest subway: Christopher Street – Sheridan Square (1,2)
“Dictators, Comics And Preachers”
Jerry goes for coffee and a vegetarian bite with actor and “Original King of Comedy” Cedric The Entertainer in a 1958 Bentley S-1, discussing mainly those who have passed on, including the likes of Muhaammad Ali, Robin Harris and Muammar Gaddafi…and video games.
↑ return to Top

Thorndale Condominium
406 W. 45th St., New York, NEW YORK (map)
nearest subway: 42nd Street – Port Authority Bus Terminal Station (A,C,E)
“At What Point Am I Out From Under?”
Jerry picks up Lewis outside this building, admiring the “Old Florida Jew” vibe he gives off, and discovering that Lewis cannot drive.

Junior’s Cheesecake
386 Flatbush Ave. Ext., Brooklyn, NEW YORK (map)
nearest subway: DeKalb Avenue (B,Q,R)
“At What Point Am I Out From Under?”
Jerry goes for an apparently overpriced cup of coffee with comedian and former Daily Show correspondent Lewis Black in a 1967 Cadillac Eldorado, admiring the many unique features of Lewis, among which are his infectious laugh, his fingers, his dramatic writing, and his terrible eating habits.
↑ return to Top

IHOP
24631 Crenshaw Blvd. D, Torrance, CALIFORNIA (map)
“Champagne, Cigars, And Pancake Batter?”
Jerry goes for a refined, European-style breakfast (complete with Belgian waffles, French crepes and American pancakes) with Austrian Oscar-winning actor Christop Waltz in a 1957 BMW 507 Roadster, trying to provide a menu as eclectic as his guest. Waltz, however, was unimpressed by any of the selections, and even inquired as to how he had wronged Jerry to deserve this sort of treatment.

Urth Caffé
8565 Melrose Ave., West Hollywood, CALIFORNIA (map)
“It’s Not So Funny When It’s Your Mother”
Jerry hosts his first ever two-time guest, Curb Your Enthusiasm and Super Dave Osborne star Bob Einstein, going for oversized coffees in a new 2017 Acura NSX…which Jerry teases Bob about giving to him as a gift for helping him write a Super Bowl spot, referenced five years earlier during Bob’s original appearance. However, Jerry pulls out the curtain from Bob, later telling him he purchased the car for himself, and all Bob gets is a sandwich and a cookie.

Restoration Hardware
8564 Melrose Ave., West Hollywood, CALIFORNIA (map)
“It’s Not So Funny When It’s Your Mother”
Jerry and Bob stop in to walk around and annoy the valets, before being kicked out for not being allowed to film.

Bay Cities Italian Deli And Bakery
1517 Lincoln Blvd., Santa Monica, CALIFORNIA (map)
“It’s Not So Funny When It’s Your Mother”
Jerry and Bob stop in for sandwiches on the patio at Bay Cities, where after a delicious lunch, Bob leaves Jerry in waiting (seemingly forever) while trying to find the restroom.
↑ return to Top