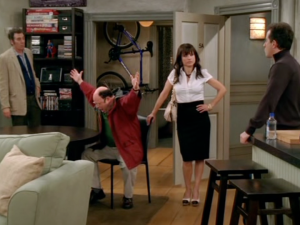 “Curb Your Enthusiasm” featured the long-awaited, epic reunion during its seventh season, culminating in the final two episodes, “The Table Read” and “Seinfeld.” On the “show within a show,” George loses all his money from his revolutionary iToilet app (thanks to Bernie Madoff), while Elaine weighs whether to tell her daughter that Jerry is her biological father.

The Improv
The Improv makes an appearance on the reunion episode, with Jerry opening the show doing stand-up.

Jerry’s Apartment
Jerry’s apartment appears multiple times in the reunion episode, with Kramer questioning George on his Bernie Madoff investments, and Elaine and Jerry discussing revealing to Elaine’s daughter that Jerry is her biological father.

Monk’s Café
Monk’s Café appears multiple times in the reunion episode, with George discovering that his ex-wife did not lose any money to Bernie Madoff, and the episode ending with George revealing to the gang that he had to sign a pre-nup with his ex-wife.

NEW YORK (map)
George’s ex-wife Amanda gleefully tells George that according to the laws of the State of New York, her half of her Madoff money is still hers and hers alone.

bank
New York, NEW YORK
Jerry mentions he’s in line at the bank when the guy in front of him leaves a space, which is unacceptable to Jerry (“tighten it up dude, tighten it up!”).

iToilet location
New York, NEW YORK
Newman claims he was upset with George over an unsatisfactory iToilet stop, who which Jerry replies that “my sympathies lie only with the toilet.”

FLORIDA (map)
George reveals to Amanda that his mother is living in Florida (perhaps in Del Boca Vista?), and he will break the news that they are back together to her, in the hopes that this will be the news that may finally kill her.

CUBA (map)
George tells Amanda about his strange relationship with Cuban food: “When I’m eating it, I don’t really like it. When I’m away for a little while, I miss it.”