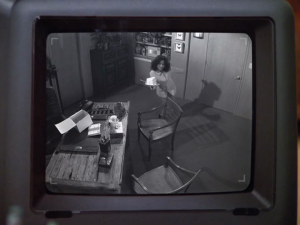 Home of the J. Peterman catalog, where Elaine works as a copywriter and editor from Seasons Seven through Nine.
nearest subway: 7th Avenue (B,D,E)

“The Hot Tub”
Elaine has “catalogue writer’s block” coming up with copy for the Himalayan walking shoe, in her first appearance working at the Peterman catalogue.

“The Caddy”
Sue Ellen Mischke visits Elaine at work wearing a bra as a top, sparking a fashion trend for Peterman, the “Gatsby Swing Top.”

“The Friars Club”
Elaine is stuck with a semi-deaf coworker, who may or may be not abusing his disability to shove work off to Elaine. Jerry later tests Bob’s hearing in the men’s washroom…which had mixed and inconclusive results.

“The Bottle Deposit”
Elaine is assigned by Mr. Peterman to buy a set of golf clubs formerly owned by John F. Kennedy, given a budget of $10,000 (she ends up spending $20,000, and then loses them).

“The Foundation”
Elaine uses her new seniority (a.k.a. “katra”) to push the Urban Sombrero as the cover feature for the new catalog.

“The Little Kicks”
Elaine’s staff begin imitating her, forcing her to place the blame on George, and inadvertently setting up George with one of her coworkers.

“The Fatigues”
Elaine intends to fire mailroom employee Eddie Sherman, but constantly promotes him out of fear. The situation eventually boils to the point where only Elaine and Eddie are writing the catalog, as all other writing staff quit in protest.

“The Chicken Roaster”
Elaine gets grilled by accounting for putting merchandise on the Peterman account…and somehow manages to expense everything but George’s sable hat.

“The Money”
Kramer visits Elaine’s office for tips on how to stay with Emily, but ends up offending her and is kicked out. Morty gets a job at Peterman in order to “support” Jerry financially, but quits when he becomes too tired of the long days running past 4:00.

“The Van Buren Boys”
Kramer sells off his entire life’s stories to Mr. Peterman for $750, which Elaine then is forced to somehow turn into Peterman’s autobiography.

“The Susie”
Elaine gets into trouble with Peggy, who constantly assumes she is named Susie. Elaine, Peggy, Mr. Peterman and “Susie” end up getting into a major dispute, with only one resolution for Elaine: get “rid” of Susie.

“The Summer Of George”
Elaine gets in a catfight with her coworker Sam, who doesn’t swing her arms when she walks. Sam later trashes Elaine’s office, and begins stalking her around the building.

“The Merv Griffin Show”
Elaine is stalked by Lou Filerman, a “sidler” with awful breath, at the office. Elaine tries easing his halitosis by giving him Tic Tacs, but nearly gets fired for it.

“The Slicer”
Elaine mentions she first met Dr. Sitarides at her office, when she did a skin cancer screening for Peterman staff.

“The Apology”
Elaine and Peggy share a bathroom by themselves…but Elaine is offended when Peggy still uses a seat cover. Peggy, a confessed germophobe, suffers from “malaise” thanks to Elaine’s germ attack on her office.

“The Cartoon”
Elaine shows off her New Yorker cartoon at her office, until she discovers its a ripoff of a “Ziggy” cartoon, as discovered by Mr. Peterman.

“The Bookstore”
Elaine tries passing on her dating story to her coworkers, until she sees Zach making out with someone else. Elaine is later forced by Mr. Peterman to help Zach’s opium detox, as its the job a true “girlfriend” would typically do.

“The Frogger”
Elaine suffers from over-caking due to endless office parties…but later experiences a daily 4:00 sugar crash, and is forced to eat Mr. Peterman’s vintage cake (and subsequently try to replace it).

“The Finale”
Mr. Peterman is seen leaving his office for the gang’s trial in Massachusetts.