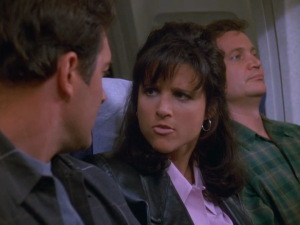 NORWAY (map)
“The Apartment”
Jerry, on watching the New York marathon: “What’s to see? A woman from Norway, a guy from Kenya, 20,000 losers.”

NORWAY (map)
“The Hot Tub”
One of the products George reads about in the Peterman catalog is the Norwegian ice-fishing vest.

Oslo, NORWAY (map)
“The Butter Shave”
Elaine and Puddy return from a European vacation from Oslo, where they constantly break up and get back together throughout the flight. Puddy discusses his fascination with Norwegian currency (the kroner) in a taxi to the airport.

Oslo Airport, Fornebu (NOW CLOSED)
Forneburingen, Bærum, NORWAY (map)
“The Butter Shave”
Elaine and Puddy fly back (22 hours with stopovers) from Oslo to New York; a direct flight is typically only 8 hours, but can run up to 20 hours with stopovers, typically in Helsinki, Amsterdam or London. Fornebu was Oslo’s main commuter airport until it was replaced by Oslo Airport Gardermoen in 1998.