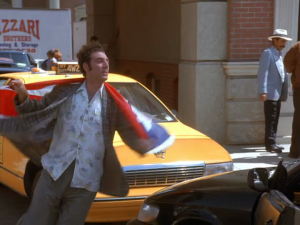 PUERTO RICO (map)
“The Bet”
In the abandoned script, Kramer returns from a vacation in Puerto Rico, where he claims he had sex with a flight attendant in a row of seats on the return trip to New York.

PUERTO RICO (map)
“The Implant”
Kramer borrows Jerry’s bathing suit for his trip to Puerto Rico, revealing that Jerry and Elaine once went there together in front of Sidra.