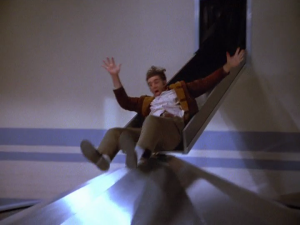 Jerry and Elaine experience the differences between first class and coach while George and Kramer scramble between airports trying to meet their flight.

Jerry’s Apartment
The apartment is only mentioned, NOT seen. Jerry tells Elaine that George is picking them up from the airport, only because George lost a bet that he could jump and touch the awning on his building.

Lambert-St. Louis International Airport
10701 Lambert International Blvd., St. Louis, MISSOURI (map)
Elaine and Jerry check into Lambert to fly back to New York, being split up on their flight to LaGuardia, then JFK, then back to LaGuardia.

St. Louis, MISSOURI (map)
Jerry mentions he got an extra ticket for his show here, so Elaine was able to visit her sister Gail.

AI International Rent A Car (NOT REAL)
St. Louis, MISSOURI (map)
Jerry and Elaine miss their shuttle back to the airport, forcing them to rush in for their flight.

John F. Kennedy International Airport
Jamaica, Queens, NEW YORK (map)
nearest subway: Howard Beach – JFK Airport (A)
Jerry and Elaine are originally supposed to fly into JFK, but are re-booked to LaGuardia after the original flight is cancelled, and eventually back to JFK due to equipment problems. George and Kramer make the pick-up here late (after Kramer scraps George’s original route of “The Grand Central! The Van Wyck!” by taking the Long Island Expressway), but are then forced to rush to LGA, and eventually back to JFK once again.

Honolulu International Airport
300 Rodgers Blvd., Honolulu, Oʻahu, HAWAII (map)
After angering the skycap in St. Louis, Elaine’s bag is tossed into the check line for Honolulu, where her bag is seen at the end of the episode.

Long Island Expressway
Long Island, NEW YORK (map)
George yells at Kramer for ruining his pickup to Kennedy by taking the Expressway instead of his planned route, where they run into a ton of traffic.

Tuscany, ITALY (map)
The first-class stewardess tells Jerry and Tia that the airline is featuring wines on their flight from the Tuscany region.