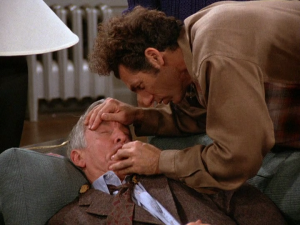 The Alternate Side (season 3, episode 11)

George’s job moving cars from one side of the street to the other turns out to be much harder than he expected. Kramer gets a line in a Woody Allen film: “These pretzels are making me thirsty.”

Jerry’s Apartment
George scores a job moving parked cars across the street, but is overwhelmed thanks to the Woody Allen movie down the street. Jerry tracks down the man who stole his car, and Kramer rehearses his line for his role in the film.

Monk’s Café
Elaine reveals that Owen has recovered (and admitted to just using her for sex), and Kramer tells the gang he was fired from the Woody Allen movie for botching his only line, and inadvertently getting glass in Woody’s eye after smashing a beer glass on a bar.

VIRGINIA (map)
George gets an opening to replace Sid parking cars across the street, as he needs to visit his sister and nephew with a limping foot in Virginia.

Worthy Rent-A-Car (NOT REAL)
New York, NEW YORK
Jerry rents a car, loses his reservation, gets the replacement totalled, and cannot get it covered under insurance…all the while as his pretzels are making him thirsty.

Chadway’s (NOT REAL)
New York, NEW YORK
Elaine meets Owen at Chadway’s for a face-to-face breakup, where he suffers a stroke immediately after.

hospital
New York, NEW YORK
In a deleted scene, Jerry convinces Elaine that she needs to go with Owen to the hospital, as she “is under contract” after already going on multiple dates and having sex with him.

Owen’s apartment
10 W. 65th St., New York, NEW YORK (map)
nearest subway: 66th Street – Lincoln Center (1)
Elaine visits Owen to feed and take care of him, but then dumps him while immobile in his wheelchair, as “it’s a bitch to get here…I have to transfer at 42nd St. to take the RR!” Thanks Erkan B. for the tip!

Times Square-42nd Street Station
W. 42nd St. and Broadway, New York, NEW YORK (map)
nearest subway: Times Square – 42nd Street (1,2,3,7,N,Q,R,S)
Elaine questions if you could die from an overdose of odor, after emerging from the 42nd Street station, after seeing Owen. She likely crossed over onto the 1, 2, or 3, as she met the gang back at Monk’s, near Cathedral Parkway-110th Street Station. This station is accessible on the 1, 2, 3, 7, N, Q, R or S lines.