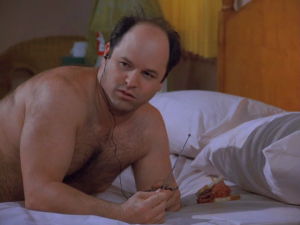 Kramer stores his blood in Jerry’s freezer. George discovers the power of combining food and sex. Jerry’s parents hire Izzy Mandelbaum to get their son in shape. Elaine gets stuck babysitting for a friend’s kid. Lloyd Bridges guest stars.

Jerry’s Apartment
Jerry’s parents visit, and encourage him to stay healthy, as they have joined a new health plan. He ditches all junk food, but they send a trainer for Jerry…Izzy Mandelbaum. Kramer announces he’s withdrawing all his blood bank deposits, which he later donates to Jerry (thus becoming “blood brothers”) after Jerry cuts himself with an XACTO knife.

Monk’s Café
George noodles with combining his two passions, food and sex…and later tries to integrate television into the mix. Elaine vents about Vivian thinking she’s irresponsible, but wants out of her responsibility when told Vivian may be terminally ill.

Del Boca Vista
Helen and Morty explain to Jerry that to maintain their health, they joined a program where they walk around their block 3 times a week (and every morning, Morty eats a plum). They later call after hearing from Kramer that Jerry was in the hospital.

Vivian’s house
NEW YORK
Vivian tries getting Kramer to babysit, but ends up sticking with Elaine…and tries to keep her on-call for life. George and Vivian instantly hit it off with sensual cured meats and television during sex. Elaine mentions to Jerry that her house is in the suburbs.

Tara’s apartment
New York, NEW YORK
George experiments with food and sex, in particular pastrami on rye with mustard…and once he somehow accomplishes that, he greedily tries to add television for the “trifecta.”

Kramer’s Apartment
Kramer decides that due to increasing charges, he will keep his blood at his apartment.

Newman’s Apartment
Due to Jerry’s paranoia about his blood, Kramer tells him that he is keeping his blood in Newman’s meat freezer.

hospital
New York, NEW YORK
Jerry first gets “three pints of Kramer” donated, after he nicks his jugular vein with George’s XACTO knife. He later gets some of Newman’s blood, after being dragged nearly a mile by the Mandelbaums, much to his horror.

Reading, PENNSYLVANIA (map)
George tries covering for Elaine to Vivian by saying she’s moving to live with her grandparents in Reading…yet Vivian knows right away that they died five years earlier.

Crabtree & Evelyn
30 Rockefeller Pl., New York, NEW YORK (map)
nearest subway: 47-50th Streets – Rockefeller Center (B,D,F,M)
In a deleted scene, Newman follows Jerry to the blood bank (where he is inquiring about changing all of his now-tainted blood), where he taunts him by saying he thought he lost his “blood brother” at Crabtree & Evelyn. The closest location to both Brooklyn and Jerry’s Apartment in 1997 would have been this location, on the concourse level of 30 Rock.