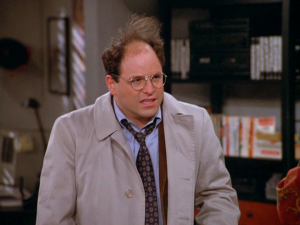 Jerry’s friendship with his baseball idol Keith Hernandez makes him act like the two of them are dating. Kramer and Newman despise Hernandez for having spit on them after a game, though Jerry suspects the involvement of a second spitter. Jerry gets jealous when Keith begins dating Elaine. George schemes for an unemployment extension by lying about his job interview with the fictitious Vandelay Industries and dating his counselor’s daughter.

Jerry’s Apartment
Jerry’s apartment becomes the short-time home of Vandelay Industries, after George falsely gives Jerry’s number as a prospective employer to keep his unemployment benefits going. After Kramer foils George’s plot, George frantically tries to salvage the situation, resulting in him lying facedown on Jerry’s floor, pants around his ankles, with Jerry questioning “and you want to be my latex salesman?”

Monk’s Café
Jerry obsesses over Keith’s signals (or lack thereof) to Elaine and George, stunned at feeling this way over a man. George confesses that his life’s ambition is to sleep with a very tall woman.

Catch A Rising Star (NOW CLOSED)
1487 First Ave., New York, NEW YORK (map)
nearest subway: 77th Street (6)
Jerry invites Keith Hernandez to a show of his on the East side, likely at this regular club of Jerry’s in the early 1990’s.

Keith Hernandez’s apartment
Upper East Side, New York, NEW YORK (map)
Keith mentions to Jerry that he lives on the East Side, and later has the audacity to ask Jerry to help him move, even though he has a ton of complicated furniture, and lives in a three-storey brownstone with no elevator.

Singer
New York, NEW YORK
George tries rushing to “Vandelay Industries” in a cab (which passes Singer), causing the driver to throw him out of the cab in a fit of rage.

Carrie’s apartment
224 E. 11th St., New York, NEW YORK (map)
nearest subway: Astor Place (6)
George drives Carrie home (after taking her to McDonald’s for dinner), unable to drive her away on her own and avoid elongating the relationship. This is also the same as Marlene’s apartment from “The Ex-Girlfriend.” Thanks Erkan B. for the tip!

Elaine’s Apartment
Elaine and Keith Hernandez are parked outside her building, where Keith makes a move on her.

Mississippi River
Memphis, TENNESSEE (map)
George and Jerry argue over their favorite explorers, which George claims is de Soto, who found the river. Jerry’s rebuttal: “Oh yeah, like they wouldn’t have found that anyways.” Historical notes say Hernando de Soto first discovered the River in or around Memphis in 1541.