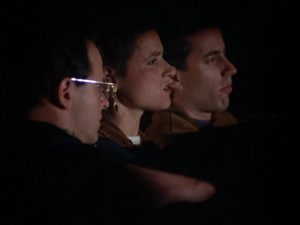 Jerry begins seeing George’s ex, Marlene, but George is more annoyed that Jerry went behind his back to pay the balance of a bogus chiropractor bill. Marlene breaks-up with Jerry because she doesn’t like his comedy act.

Jerry’s Apartment
George proudly declares that he has broken up with Marlene, opening the door for Jerry to begin to see her.

Monk’s Café
Jerry meets with Marlene here shortly after she breaks up with George. He later confesses to seeing Marlene, which George declares he really has no issue with Jerry and Marlene dating.

George’s Apartment
George mentions how Marlene “seduced him” in his apartment by stealing his seat.

Elaine’s Apartment
Elaine mentions how she is on a no-talk basis with a teacher in her building.

Joe’s Fruit (NOT REAL)
New York, NEW YORK
Kramer tries convincing Jerry to buy fruit here, as he finds that supermarket fruit stinks. Although fictional, it is implied throughout the show that Joe’s is very close to Jerry’s, and is based on Bak’s Market (now closed), a fruit stand near Larry David where he was once banned, located at 609 W. 43rd St.

Marlene’s apartment
224 E. 11th St., New York, NEW YORK (map)
nearest subway: Astor Place (6)
George realizes he left some of his books at Marlene’s after breaking up with her, desperately asking Jerry to get them back for him. This is also the same as Carrie’s apartment from “The Boyfriend.” Thanks Erkan B. for the tip!

chiropractor’s office
New York, NEW YORK
George refuses to pay an additional fee out of principle, which Jerry pays off after George storms out of the office.

parking spot
New York, NEW YORK
Jerry and Marlene are parked, where Marlene dumps Jerry as she disliked his act, and must be with someone that she respects what they do…to which Jerry replies with “you’re a cashier!”