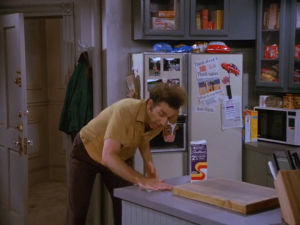 In this classic Emmy award-winning episode, Jerry, George, Elaine and Kramer enter a contest to see who is “master of your domain.”

Jerry’s Apartment
Jerry valiantly struggles with maintaining his “mastership” of his domain, while the rest of the gang around him drops off one by one, and Jerry fights off temptation from all sides. Jerry tells Marla the virgin about the contest, causing her to storm out and meet John F. Kennedy Jr. outside the building.

Monk’s Café
After finding out that George gets caught doing “that” by his mother, the gang sets the rules for the infamous “Contest,” agreeing that everyone will chip in $100 (Elaine $150), with the “master of their domain” winning it all.

Costanza House
George is caught doing “that” by his mother while reading Glamour while dropping the car off at their house, resulting in Estelle throwing out her back, and ultimately leading to the creation of the Contest.

Metropolitan Hospital Center
1901 First Ave., New York, NEW YORK (map)
nearest subway: 96th Street (6)
Estelle is checked in here after she throws out her back from falling in shock of seeing George pleasure himself, and where George discovers the beautiful patient next door.

Chicago, ILLINOIS (map)
Estelle mentions that Frank is in Chicago, and thus George is lucky that Frank did not see George’s “spectacle” that landed her in the hospital.

George’s Apartment
George is seen tossing and turning in bed, struggling to sleep due to the Contest.

Elaine’s Apartment
Elaine is seen tossing and turning in bed, struggling to sleep due to the Contest. Elaine also reveals that she lives downtown, as she had to lie about living near Jerry to split a cab with John F. Kennedy Jr., after which she headed back downtown.

Kramer’s Apartment
Kramer is seen fast asleep, due to his early bowing out of the Contest.