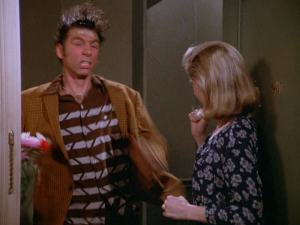 Jerry starts dating a beautiful hit and run driver, then is torn when he meets the victim and realizes he’d rather date her. Mary Hart’s voice causes Kramer to have convulsions. George has an affair with Elaine’s married friend.

Jerry’s Apartment
Jerry has to sustain the lie of Angela’s hit-and-run amongst the gang, until she is eventually exposed. Kramer suffers another seizure at the sound of Mary Hart’s voice when Jerry and Elaine watch “Entertainment Tonight.”

Elaine’s Apartment
Elaine is on the phone with Jerry at her apartment when Jerry witnesses a hit-and-run. Elaine later accidentally gives away Robin’s location to Michael when he is looking for her, essentially revealing their extramarital affair.

Queens, NEW YORK (map)
Jerry claimed in his lie to Elaine that he followed the hit-and-runner over the bridge into Queens, where he then got into a fight.

AUSTRALIA (map)
Kramer claims that a sick, mentally disturbed person like Jerry’s girlfriend Angela should be sent to Australia, as England used to send their disturbed people there when it was a penal colony.

England, UNITED KINGDOM (map)
Kramer claims that a sick, mentally disturbed person like Jerry’s girlfriend Angela should be sent to Australia, as England used to send their disturbed people there when it was a penal colony.

SWITZERLAND (map)
Elaine, at dinner with George, Robin and Michael, tells them about how she dated a matador named “Eduardo Carrochio,” who she met at a bullfight in Switzerland.

parking spot
New York, NEW YORK
Jerry and Angela are parked, eating ice cream, while Jerry subliminally drops hints about how Anthony Quinn and Kirk Douglas, while both bad drivers, always are sure to own up to their driving mistakes.

Albany, NEW YORK (map)
Elaine claims that Kramer is getting seizures due to Mary Hart’s voice, just like a woman in Albany.

Becky Gelke’s apartment
309 W. 93rd St., New York, NEW YORK (map)
nearest subway: 96th Street (1,2,3)
The apartment of the victim of Jerry’s hit-and-run girlfriend, who Jerry tries to ask out, but Kramer ends up successfully wooing her. Kramer claims her apartment is across the street from his apartment, but unless he has super vision that he can see 12 blocks ahead, the scaffolding tells the truth. Thanks Erkan B. for the tip!

George’s Apartment
George and Robin “commit adultery” by sleeping together at his apartment. This is the only time in the series where the exterior of George’s first apartment is shown.

Zabar’s
2245 Broadway, New York, NEW YORK (map)
nearest subway: 79th Street (1)
Jerry claims a girl might run into a matador on the Upper West Side at Zabar’s…or Ray’s Pizza (of which there are too many in New York City to possibly list).