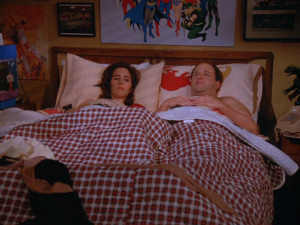 George’s apartment from the start of the series until he is unemployed and forced to move back in with his parents in Season Five.
nearest subway: 86th Street (1)

“The Ex-Girlfriend”
George mentions how Marlene “seduced him” in his apartment by stealing his seat.

“The Parking Garage”
George panics that his parents are waiting in front of his building for their anniversary dinner, while he is lost in the garage.

“The Fix-Up”
George calls Jerry to tell him about his date with Cynthia, where it is revealed that the two had sex at his apartment, but since George felt uncomfortable with it being the first date, he thought he would perform better in the kitchen, where they had sex with Cynthia’s head on a hot plate.

“The Good Samaritan”
George and Robin “commit adultery” by sleeping together at his apartment. This is the only time in the series where the exterior of George’s first apartment is shown.

“The Contest”
George is seen tossing and turning in bed, struggling to sleep due to the Contest.

“The Pick”
George claims that now that he is alone after Susan, he will spend his days in his disgusting apartment eating Chinese takeout in dirty laundry.

“The Junior Mint”
George claims that Roy’s art he purchased (the triangles) really spruce up his apartment.