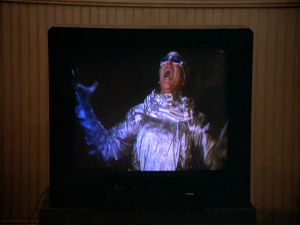 George’s false alarm heart attack lands him in the hospital for a tonsillectomy. He visits Kramer’s holistic healer but experiences a downfall of alternative medicine.

Jerry’s Apartment
Jerry awakes in the middle of the night, writing what he finds to be a hilarious bit, which just turns out to be repeating a line from a cheesy TV movie: “flaming globes of Sigmund!”

Monk’s Café
George is convinced he is having a heart attack at Monk’s, after watching a TV program the night before about coronaries. In true George fashion, he still manages to argue his check before leaving for the hospital.

Manhattan Memorial Hospital (NOT REAL)
New York, NEW YORK
While supposedly having a heart attack, George suggests Jerry have him taken here, as there’s “less of a line” than other hospitals. No establishing shot is shown of a hospital building, but rather an ambulance taking George to the hospital.

Brooklyn Museum
200 Eastern Pkwy., Brooklyn, NEW YORK (map)
nearest subway: Eastern Parkway – Brooklyn Museum (2,3)
A poster for the museum is seen behind Jerry and the nurse at the hospital.

Sizzler
Kramer praises the hospital cafeteria, saying its like “Sizzler opened up a hospital.”

parking spot
New York, NEW YORK
Elaine and Dr. Fein are parked, with Dr. Fein going into tremendous details about the physiology of the tongue.