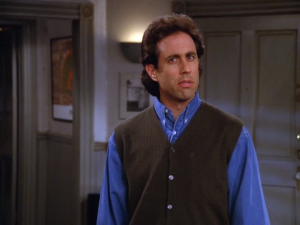 An hour-long look back at highlights from the first 100 episodes.

The Improv is not featured in this episode. Monk’s Café is only featured in clips of previous episodes.

Jerry’s Apartment
Jerry introduces the retrospective of six seasons and 100 episodes, sharing the gang’s many experiences, “both positive and negative…mostly negative.”