Selma, ALABAMA (map)
“The Diplomat’s Club”
George proclaims his racial unbias, proudly saying that “he would have marched on Selma if it were on Long Island.”

ALABAMA (map)
“The Maid”
Elaine recalls that Jerry was once thrown off a bus by Kenny Rogers in Alabama after opening for him, to which Jerry replies with “I had that coming to me.” 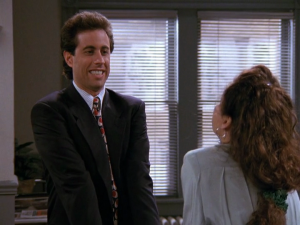 CONNECTICUT (map)
“The Stake Out”
After finding out Elaine is dating a stockbroker, Jerry replies with a sarcastic “Ah! High finance! Bulls, bears, people from Connecticut…”

Danbury, CONNECTICUT (map)
“The Baby Shower”
Elaine says her roommate Tina got sick “during the love-in” during an outdoor production of “Hair” in Danbury.

CONNECTICUT (map)
“The Chaperone”
Miss Connecticut was one of the three delegates for the Miss America pageant that were at the Yankee game, where Jerry asks out Miss Rhode Island.

NEW HAMPSHIRE (map)
“The Parking Garage”
George mentions how Frank would go from state to state looking for air conditioner deals for weeks at a time, and how him and his mother would get random calls from him from hotels in New Hampshire.

Manchester-Boston Regional Airport
1 Airport Rd., Manchester, NEW HAMPSHIRE (map)
“The Diplomat’s Club”
Manchester is one of the airports shown on the flight board during Kramer and Earl’s “competition.”

RHODE ISLAND (map)
“The Chaperone”
Miss Rhode Island was one of the three delegates for the Miss America pageant that were at the Yankee game, after which Jerry asks her out. According to die-hard pageant fan Kramer, Rhode Island is never in contention in the pageant, but he agrees to chaperone her and coach her to victory.

GREENLAND (map)
“The Pilot”
In helping explain her character, Jerry mentions to “TV Elaine” that the real Elaine is “fascinated with Greenland.”

GREENLAND (map)
“The Label Maker”
Kramer announces he’s built a stronghold around Greenland during his epic game of Risk with Newman.

GUATEMALA (map)
“The Jacket”
Alton Benes mentions to Jerry and George that he served in Guatemala in 1953, helping to overthrow Jacobo Arbenz Guzman.

GUATEMALA (map)
“The Fusilli Jerry”
Kramer mentions to the gang that Dr. Bakersol worked on a kid from Guatemala with no nose, and “turned him into Ricardo Montalban.”

Seattle, WASHINGTON (map)
“The Busboy”
Elaine hosts her boyfriend Ed from Seattle, but desperately tries getting rid of him. Jerry claims that Seattle is “the pesto of cities.”

SeaTac Plaza Hotel (NOT REAL)
Seattle, WASHINGTON
“The Diplomat’s Club”
On the whiteboard behind George in his office, a listing for “SEATAC PLAZA HOTEL” is visible, next to a list of games against the Seattle Mariners.

Seattle, WASHINGTON (map)
“The Yada Yada”
Marcy mentions to George how her ex-boyfriend came over before moving to Seattle, and yada yada yada, she’s really tired. 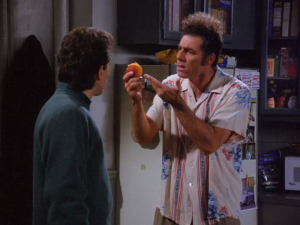 OREGON (map)
“The Doodle”
Kramer is ecstatic that Mackinaw peaches are in from Oregon, as they’re only in season two weeks of the year; however, he later cannot enjoy due to his exposure to toxic fumes. 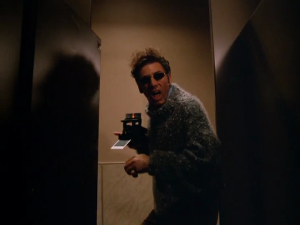 SOUTH AMERICA (map)
“The Old Man”
When trying to sell off old records, Kramer and Newman try to hype up Sergio Mendes by claiming that he “can’t even walk down the street in South America! They follow him, like a cult!”

SOUTH AMERICA (map)
“The Sniffing Accountant”
Jerry and Kramer discover their accountant took off to South America on a “business trip,” potentially with their money, thus having Jerry impune the entire continent by claiming that people that go there “come back with things taped to their large intestine!”

SOUTH AMERICA (map)
“The Label Maker”
Kramer takes over the continent from Newman during their epic game of Risk…”and there ain’t nothing you can do about it!”

Andes Mountains, SOUTH AMERICA (map)
“The Abstinence”
George brings up a hypothetical situation of Jerry, George and Kramer flying over the Andes, and who should be eaten first in the event of a crash. The Andes spread across seven South American countries (Argentina, Bolivia, Chile, Colombia, Ecuador, Peru, and Venezuela). 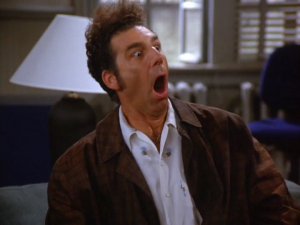 George has issues when his girlfriend takes credit for buying Elaine a big salad. Jerry is disturbed to discover that his girlfriend was dumped by Newman. Kramer gets involved in a slow-speed car chase with a suspected murderer.

Jerry’s Apartment
The infamous handoff of “the big salad” takes place in the apartment, setting a wild course of action thereafter. Jerry obsesses over why Newman dumped Margaret. Kramer tells the gang of his golf game with Steve Gendason, and discovers that Gendason is wanted for murder.

Monk’s Café
The infamous “big salad,” which George buys for Elaine (but all credit is given to his girlfriend Julie), was purchased from Monk’s.

Newman’s Apartment
Jerry makes his first visit to “the east wing,” to grill Newman about his past relationship with Jerry’s new girlfriend Margaret.

Andy’s Deli II
418 Columbus Ave., New York, NEW YORK (map)
nearest subway: 81st Street – Museum Of Natural History (B,C)
George and Elaine pass by here in their taxi, where George brings up his issue over Elaine giving credit for the big salad purchase to Julie instead of him.

Kennedy Cabot & Co. (NOW CLOSED)
9470 Wilshire Blvd., Beverly Hills, CALIFORNIA (map)
An ad for this firm is seen on the back of Margaret’s newspaper while she is talking to Jerry.

New Jersey Turnpike
NEW JERSEY (map)
Gendason tries to escape his arrest warrant by fleeing, with Kramer driving, off the Turnpike in a white Ford Bronco. Kramer claims that Gendason just wants to see his fish: “I’m Kramer…you know who I am, damn it!” The entire chase parodies the infamous 1994 O.J. Simpson Ford Bronco chase, which ran for 50 miles along Interstate 405 in California.