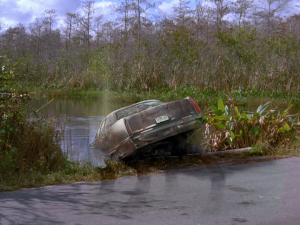 George discovers his parents are rich. Jerry tries to buy back the Cadillac that his father sold to Jack Klompus. Kramer can’t sleep in the same bed as his girlfriend because of her “jimmy legs.” Kramer moves in with the Costanzas and convinces them to spend their savings by moving to Florida. Elaine hires Morty to work at J. Peterman. Sarah Silverman guest stars.

Jerry’s Apartment
Jerry’s parents come to visit, and announce they have sold the Cadillac, and they want Jerry to have the money back. Jerry lies twice about returning to Florida to re-buy the Cadillac back for them. Morty decides he needs to rejoin the workforce to support Jerry financially.

Kramer’s Apartment
Kramer gets no sleep thanks to his new girlfriend, who suffers from “the jimmy legs.” Kramer later fears sleeping alone, after hearing a “burglar” (really Morty exercising) trying to break into his apartment for 25 minutes.

D’Amico Fresh Roasted Coffee
309 Court St., Brooklyn, NEW YORK (map)
nearest subway: Carroll Street (F,G)
Elaine buys George a bag of Arabian mocha java, prompting George to set out to prove he has money to pay for gifts, as he feels that “she’s sticking it to me!”

J. Peterman
Kramer visits Elaine’s office for tips on how to stay with Emily, but ends up offending her and is kicked out. Morty gets a job at Peterman in order to “support” Jerry financially, but quits when he becomes too tired of the long days running past 4:00.

Bally’s Atlantic City
1900 Pacific Ave., Atlantic City, NEW JERSEY (map)
Jerry lies to his parents and claims he’s performing at Bally’s, thus having to leave. We discover that Kramer has the phone number memorized, as he “used to have a problem.”

Costanza House
George learns about his family history, trying to determine what’s better: money or freedom. Kramer and Emily later move in when Frank and Estelle go to Florida, as Kramer is afraid to stay at home alone and needs separate beds for Emily’s “jimmy legs.”

Pines Of Mar Gables
Jerry flies back to Florida to buy his car back from Jack Klompus. Jerry later maxes out his credit cards by cleaning up the car (after Jack drives it into a swamp), and ends up sleeping in it, since Jack won’t let him stay in his condo.

Naples, FLORIDA (map)
The only condition of Jack’s selling back of the Cadillac to Jerry is that Jack gets to drive his wife Doris to Naples.

Emily’s apartment
340 W. 19th St., New York, NEW YORK (map)
nearest subway: 23rd Street (C,E)
Kramer and Emily try the leaving after sex routine to avoid the “jimmy legs,” but the plan backfires on Kramer when he asks to stay over, afraid to return to his apartment.

Golden Nugget Atlantic City (NOW CLOSED)
3400 Pacific Ave., Atlantic City, NEW JERSEY (map)
Jerry lies again, telling his parents he has to “re-pack and go” when he books another gig at the Golden Nugget. The Golden Nugget was sold and renamed Bally’s Grand Hotel and Casino in 1987, which it stayed as until 1998, and closed for good in 2014, meaning at the time of the episode there was actually no Golden Nugget in Atlantic City (a separate property with the same name opened in 2011).

GERMANY (map)
Estelle tells George that his father originally wanted to purchase a Mercedes-Benz, but that she made him buy a Cadillac instead, since she won’t ride in a German car.

Walt Disney World
Lake Buena Vista, FLORIDA (map)
Frank, on potentially moving to Florida with Estelle: “you can drop a grand in Disney World like that!”

43rd St., New York, NEW YORK
Morty mentions to the J. Peterman team that he knows “a couple of Chinamen” on 43rd who can get them silk for $500 a bolt.

Del Boca Vista
Frank and Estelle buy a condo at Del Boca Vista, since Queens is too “low-rent” for them…but quickly decide to return to Queens after seeing a “bum” (actually Jerry) sleeping in a car. Helen and Morty eventually leave Del Boca Vista for a trailer (“its too much house”), since they want to save their money to still support Jerry.