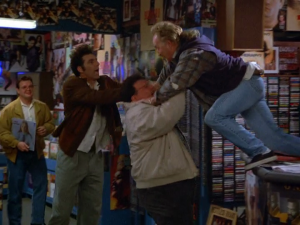 Jerry, George and Elaine volunteer to spend time with senior citizens. Jerry loses his, George’s fires him, and Elaine can’t even stand to look at hers.

Jerry’s Apartment
Jerry, Elaine and George are assigned senior citizens as part of their volunteer work, but are later lectured by the agency and the family of Mr. Fields after Jerry “loses” him en route to his dentist.

Monk’s Café
Elaine, newly minted as a volunteer for senior citizens, recruits Jerry and George to volunteer as well. Sid and Ben are later shown in the gang’s usual booth, having a similar nonsensical conversation about women.

FLORIDA (map)
Jerry mentions Florida in his opening monologue, joking that Spring Break was started thousands of years ago, when life expectancy was only 30, and people would thus move to Florida in their late teenage years.

SOUTH AMERICA (map)
When trying to sell off old records, Kramer and Newman try to hype up Sergio Mendes by claiming that he “can’t even walk down the street in South America! They follow him, like a cult!”

Sid Fields’ apartment
255 W. 92nd St., New York, NEW YORK (map)
nearest subway: 96th Street (1,2,3)
Jerry goes to volunteer by spending time with Mr. Fields, but ends up causing catastrophe with George trying to hit on his Senegalese housekeeper, and Kramer and Newman trying to take all his records. Thanks Erkan B. for the tip!

Mrs. Oliver’s apartment
New York, NEW YORK
Elaine goes to volunteer by spending time with Mrs. Oliver, and discovers she has both a giant goiter and a previous love affair with Mahatma Gandhi.

SENEGAL (map)
Sid Fields’ housekeeper is from Senegal (Jerry: “wild, wild stuff…”). George later has a rendezvous with the housekeeper, who dips his bald head in oil, presumably to rub all over her body afterwards.