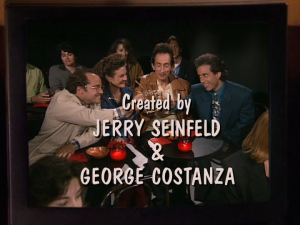 Jerry’s Apartment
Tensions are high leading up to the pilot, with Jerry obsessing over his lack of acting ability, George obsessing over his lip discoloration which may kill him, and Kramer…just wanting to go to the restroom. The gang later reunites at the apartment to watch the “Jerry” pilot together.

Monk’s Café
Elaine brings Monk’s before the Equal Employment Opportunity Commission, after she is refused a job for not being large-breasted by the new Monk’s management. She later discovers all the new waitresses are sisters, daughters of the new owner.

Pfieffer’s (NOT REAL)
New York, NEW YORK
A clip of Pfieffer’s is featured during a flashback of Elaine and Russell’s first meeting, from “The Shoes.”

Dana Foley’s office
New York, NEW YORK
George visits his therapist for another session, to discuss his concern over his upper lip “discoloration.”

Juneau, ALASKA (map)
Jerry claims that the actress playing TV Elaine, Sandi Robbins, is from Juneau: “She came down from Juneau by sled…she was in the Iditarod, got to the finish line, just kept going.”

West Park Medical Group (now West Care Medical Associates)
50 W. 77th St., New York, NEW YORK (map)
nearest subway: 81st Street – Museum Of Natural History (B,C)
George goes to have his white “discoloration” examined by a doctor, and later panics when he doesn’t get a “get outta here!” from the doctor when asking if the discoloration is cancer.

GREENLAND (map)
In helping explain her character, Jerry mentions to “TV Elaine” that the real Elaine is “fascinated with Greenland.”

DENMARK (map)
Jerry mentions to TV Kramer during the pilot that Haagen-Dazs ice cream is a made-up brand name, and not actually from Denmark.

NEW JERSEY (map)
In finding out Haagen-Dazs isn’t from Denmark, TV George tells Jerry and TV Kramer it is really made in New Jersey.

Camp Tioga
1635 State Rd. 2036, Thompson, PENNSYLVANIA (map)
Wilton Marshall recognizes a wigged Elaine at the “Jerry” taping, after not having seen her since going to camp with her here in 1978.

Pines Of Mar Gables, FLORIDA
Jerry’s parents are seen watching the pilot at home, with Helen once again asking “how could anybody not like him?”

Promenade Place (NOT REAL)
Mineola, Long Island, NEW YORK (map)
Drake and Drakette from “The Handicap Spot” are shown back together, watching the pilot at their apartment (“hate the Sein!”).

Cheryl Fong’s apartment
New York, NEW YORK
Cheryl and her cousin Ping, the delivery man from “The Visa,” are shown watching the pilot.

Sanger House (NOT REAL)
Wappingers Falls, NEW YORK (map)
The Sanger family from “The Bubble Boy” are shown watching the pilot at home.

Newman’s Apartment
Newman is shown sleeping on his couch, with a baseball game on in the background instead of the “Jerry” pilot.

Pendant Publishing
Russell mentions to the other two Greenpeace activists that Elaine works at Pendant. When Russell “dies,” one of the activists (played by Larry David with an accent) promises that he’ll “write to her…I’ll tell her all about you, and what you did out here!”