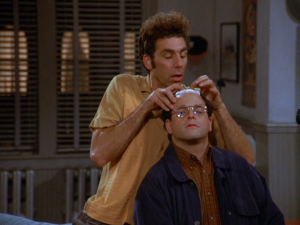 CHINA (map)
“The Parking Garage”
Jerry claims he needs to see his parents to the mall security guard, as his father has spent the last 14 years in a red Chinese prison.

CHINA (map)
“The Chinese Woman”
Jerry mentions China in his opening monologue, crediting the Chinese people for sticking to chopsticks, even though they are by now aware of other cutlery technology.

CHINA (map)
“The Race”
While lamenting the fall of the Soviet Union, Elaine’s boyfriend Ned mentions “we still got China, Cuba…but its not the same.”

CHINA (map)
“The Gum”
Lloyd Braun tells Jerry that the gum he’s given him is from China, and that he could arrange for more if Jerry would like.

Yangtze River, CHINA (map)
“The Shower Head”
Mr. Peterman mentions in 1979, he was traveling the Yangtze in search of a Mongolian horse-hair vest when he took “just a taste” of opium.

CHINA (map)
“The Invitations”
George proposes he writes Susan a letter to dump her, and then moves to China, disappearing “in a sea of people”, for 6 months to a year…but decides it can’t work because he’d lose his job.

CHINA (map)
“The Wizard”
George mentions how any news about China is an “instant page turner.”

Hong Kong, CHINA (map)
“The Bookstore”
Kramer mentions how he wants to see Hong Kong’s pagodas “before it all goes back to China”; he also mentions how the city has outlawed the rickshaw, which he things would fit perfectly in New York…and has Newman ship a rickshaw from the Hong Kong post office to start their endeavor.

CHINA (map)
“The Bookstore”
Kramer mentions that he wants to see the pagodas of Hong Kong before it is returned to China…only a year too late, as China overtook control of Hong Kong in 1997.