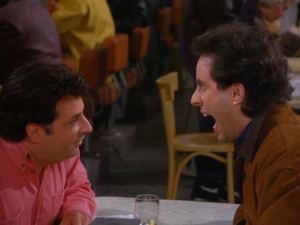 George learns the truth about a friend’s illness. Kramer helps bring in a notorious scofflaw.

Jerry’s Apartment
George discovers that Jerry already knew about Gary’s cancer, and later cracks under pressure and reveals that Gary never actually had cancer. Kramer tells Elaine that he said “hi” to Jake Jarmel on her behalf.

Monk’s Café
Gary shares a secret with George, revealing he never actually had cancer, so Jerry has to “be nice” under the assumption he does not know this information. Elaine gives Mr. Lippman her glasses frames, and George debuts his toupee.

Waldenbooks (NOW CLOSED)
461 Park Ave., New York, NEW YORK (map)
nearest subway: 59th Street (4,5,6)
Jake Jarmel has a book signing here, where Kramer and Elaine confront him about where he got his glasses. Kramer accidentally tells Jake that Elaine said hi…and then Elaine goes later to “rectify” the situation. The establishing shot shows a Waldenbooks on street level, of which the closest to Elaine’s Apartment is this location.

Kinney Parking Corporation lot (LOT NOT REAL)
New York, NEW YORK
Gary offers George a spot for tax-only owned by his company as part of his owed “secret,” but George the his spot when Newman’s car is impounded by the courts. Gary mentions that the lot is around the corner from Monk’s Café.

Hair Team For Men (NOT REAL)
New York, NEW YORK
Jerry buys Gary an unlimited pass here…and Gary convinces George to get a “rug” here as well. This was originally scripted to be the existing Hair Club For Men, with the closest location to Jerry at 115 E. 57th St.

Michael’s Muffins (NOW CLOSED)
158 Seventh Ave., New York, NEW YORK (map)
nearest subway: 18th Street (1)
Elaine passes by here in her cab, talking to her driver about Jake’s smugness before seeing a man on the street in the same glasses.

MALAYSIA (map)
A man on the street Elaine pulls aside tells her that he bought his glasses in Malaysia, the same as Jake Jarmel’s. Elaine first wears them to mock Jake (“Where did you get those?” “Malaysia…I was in the area.”), and then she later gives them to Mr. Lippman, who gets into a fight with Jake during a press conference.

United States Capitol
East Capitol St. NE and 1st St. NE, Washington, D.C. (map)
Jerry asks Kramer what a political Whip does, like in the Senate or the House, to which Kramer says they physically whip party members who step out of party lines. Actual whips, responsible for managing discipline within their respective parties, are present in both the United States Senate and House Of Representatives, which both meet in the Capitol building.

Miami Beach, FLORIDA (map)
After seeing George with a toupee, Jerry tells him to “buy some white shoes, move down to Miami Beach, just get the whole thing over with.”

New York City Hall
260 Broadway, New York, NEW YORK (map)
nearest subway: City Hall (R)
Gary tells George that he can’t give him a free parking spot after all, as he “can’t fight City Hall” after they gave the spot to the scofflaw, Newman.