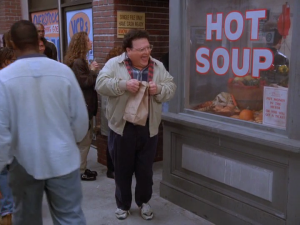 The gang discovers an amazing soup stand that’s run by a dictatorial chef. Jerry must decide between his girlfriend, “Schmoopie,” and the soup. Elaine buys an antique armoire from a guy on the street and asks Kramer to watch it until she’s able to move it into her apartment.

Jerry’s Apartment
Jerry and George convince Elaine to try the Soup Nazi, and break down the “rules” of ordering. Kramer apologizes to Elaine for letting two “toughs” steal her armoire, and George confronts Jerry over using baby talk with Sheila.

Monk’s Café
Jerry apologizes to Sheila for choosing the Soup Nazi over her. “Inspired” by Jerry and Schmoopie, George and Susan begin similar baby-talk, leading to a baby-talk-off at the coffee shop, followed by a “make-out-off” of sorts between the two couples.

City Cinemas 1, 2 & 3
1001 Third Ave., New York, NEW YORK (map)
nearest subway: 59th Street (4,5,6)
Jerry and “Schmoopie” decide to go to the theatre at Third Ave. and E. 61st St. with George and Susan, after George recommends the theatre at 84th and Broadway (likely the gang’s usual theatre, the Loews Paragon at 2310 Broadway). City Cinemas is the closest theatre to Third and 61st, just one block south.

The Original Soup Man International
259-A W. 55th St., New York, NEW YORK (map)
nearest subway: 57th Street – 7th Avenue (N,Q,R)
Is there really any explanation needed? Jerry, George and Elaine all try their hand at ordering soup from the “Nazi regime,” with George getting his food revoked and Elaine getting banished for one year. Hoo-ah!

Elaine’s Apartment
Kramer guards an armoire outside Elaine’s apartment until its stolen by two “toughs.” Elaine discovers the Soup Nazi’s recipe collection in the armoire Kramer replaces for Elaine, putting him out of business for good.

EUROPE (map)
Jerry, when discussing with “Schmoopie” on whether there is some truth to every joke: “Nobody with a terminal illness goes from the United States to Europe for a piece of Bavarian Cream Pie!”

ARGENTINA (map)
The Soup Nazi declares that thanks to Elaine, he is closing shop and moving to Argentina (as many other Nazis did following World War II).