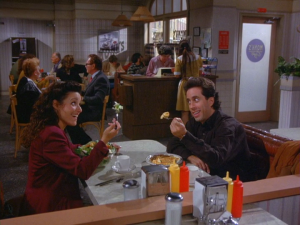 Kenny Bania offers Jerry an Armani suit in exchange for a meal, but insists that soup doesn’t count.

Jerry’s Apartment
Kenny Bania trades his Armani suit for dinner with Jerry, after Kramer twists Jerry’s arm. Jerry tells George that Kelly likely called a date “audible” after George brought up manure on their day date in the park.

Monk’s Café
George goes out with Kelly, a waitress at Monk’s, who he later discovers already has a boyfriend (who is apparently “a real watch freak”). Now uncomfortable being around her, George tries to convert the gang to going to Reggie’s, the “Bizarro coffee shop,” with disastrous results.

England, UNITED KINGDOM (map)
Elaine announces she was in England with Mr. Pitt for 5 days, to George’s surprise; she met an Englishman, Simon, who she flies in to New York to stay with her, but ends up being a real “bounder.”

Kramer’s Apartment
Kramer gets rid of his refrigerator in an attempt to eat only fresh food…but runs into a problem when he begins dating Hildy, a “full figured gal” who likes to eat.

Central Park
New York, NEW YORK (map)
George and Kelly walk through the park, where George describes his love of the word “manure”…and Kelly reveals she may have a “watch freak” boyfriend.

Bania’s Apartment
New York, NEW YORK
Bania is shown calling Jerry to bug him about where to go for his free dinner, where he first suggests going to Mendy’s.

Mendy’s
61 E. 34th St., New York, NEW YORK (map)
nearest subway: 33rd Street (6)
Jerry takes Bania for his free meal in exchange for a suit…however, Bania orders soup, thus in his mind saving his meal for another time. According to Bania, Mendy’s has “the best swordfish in the city Jerry…the best!” They go to the original 208 W. 70th St. location, which has since closed.

Reggie’s (actually Munson Diner, NOW CLOSED)
12 Lake St., Liberty, NEW YORK (map)
Kramer confirms he’s dating Hildy, a “full figured gal” who is a waitress here, a rival to Monk’s Café. George, Elaine and Jerry go, but cannot order an egg white omelette (they make a note of specifically saying no), a big salad or a decaf coffee. George is later seen eating here by himself, after getting scorned by Larry the manager for calling Monk’s too often, trying to get Kelly in trouble. The original Hell’s Kitchen location was moved, via flatbed, outside the city to Liberty in 2005.