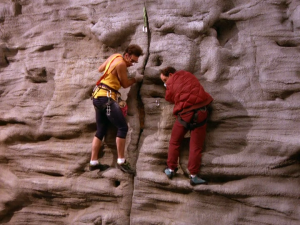 Elaine agonizes over a woman’s refusal to pass her some toilet paper under the stall of a public restroom. Kramer convinces Jerry that his girlfriend makes a living as a phone sex operator. George befriends Elaine’s “mimbo” boyfriend.

Jerry’s Apartment
Kramer and Jerry rack their brains whether Jane is also “Erica,” a 976 call girl. Elaine tells Jerry about the stall incident, and he scrambles to hide Jane’s voice from her once he puts two and two together. George complains about Kramer being invited rock climbing, and having to confess Tony’s accident to Elaine after they go climbing.

Monk’s Café
Elaine discovers that Jerry’s girlfriend Jane was the woman who could not “spare a square,” so Elaine exacts revenge in the Monk’s ladies room by removing all toilet paper, and fleeing the restaurant once Jane enters a stall.

rock climbing spot
George, Kramer and Tony the “mimbo” go rock climbing, and in mixing up who was responsible for Tony’s climbing rope, accidentally make Tony take a bit of a “tumble.”

Elaine’s Apartment
Elaine questions Tony on the words “radical reconstructive surgery” following his rock climbing accident. George tries to reconcile with Tony, but Tony and Elaine tell George to “step off” once and for all.