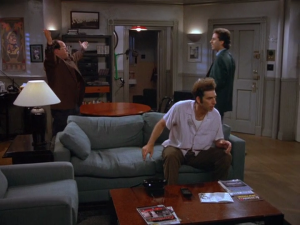 Jerry discovers the girl he’s dating is a virgin. Kramer’s constant interruptions make it difficult for Jerry and George to write their pilot. When they go pitch it to the network, George’s kiss costs Susan her job at NBC.

The Improv
Jerry and George meet Marla and Stacy at the bar, while they argue over coming up with a decent script storyline for the pilot.

Jerry’s Apartment
Jerry brings on Marla to organize his closets, where she reveals she is a virgin. George discovers his kiss with Susan has gotten her fired from NBC (“finally, my stupidity pays off!”), but is warned by Jerry that George cannot dump her until she finds another job.

Monk’s Café
Jerry and George argue over George’s desire to break up with Susan, as it means their pilot deal will disappear as well. Elaine later discusses the overrating of sex with Marla the virgin.

Berlin Wall
Berlin, GERMANY (map)
Jerry lied to Marla to initially get out of cleaning his closet by saying he was going to Berlin after the Berlin Wall came down, thus inspiring Marla’s current boyfriend to do the same and never return. Jerry: “you must have been devastated being left for a wall.”

NBC Studios (New York)
30 Rockefeller Pl., New York, NEW YORK (map)
nearest subway: 47-50th Streets – Rockefeller Center (B,D,F,M)
George and Jerry meet with NBC to go over their pilot ideas, which ultimately result in the butler story being green-lit. George later tries coercing David Letterman into dating Susan, so he can keep the good job for girls without having an actual girlfriend. He instead inadvertently gets her fired for kissing her in their meeting.

Los Angeles, CALIFORNIA (map)
Rita Kirson tells Jerry that Russell couldn’t make their meeting because there was a problem on the “Blossom” set in Los Angeles.

Towson, MARYLAND (map)
Jerry tells Marla that Elaine literally comes from a broken home, as a cracked tree destroyed her home as a child.

Kramer’s Apartment
In a deleted scene, Jerry, now sick of Kramer constantly on his couch watching television, slides his TV unit across the hall to Kramer’s. In a crossover scene with the Mad About You episode “The Apartment,” which aired the same night as “The Virgin,” Kramer is visited by the man who he is subletting his apartment from, Paul Buchman, who transfers his lease to Kramer for good.

Smiler’s
532 Madison Ave., New York, NEW YORK (map)
nearest subway: 5th Avenue – 53rd Street (E,M)
In a scene from the crossover Mad About You episode “The Apartment,” which aired the same night as “The Virgin,” Paul visits Kramer to discuss his subletting of his apartment to Kramer, but Kramer tries to rush out, saying he needs to get to Smiler’s before they close. When told by Paul they are open 24 hours a day, Kramer rebuts with “No, I heard a rumor.”