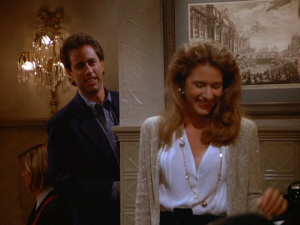 Jerry tries to buy his watch back from Uncle Leo to appease his parents. Meanwhile, George pleads with the NBC executive to reconsider their pilot deal. Elaine enlists Kramer in a plan to break up with Dr. Reston.

Jerry’s Apartment
Jerry gives his father a new wallet to replace the old one, sneaking in $400 cash for good measure.

La Boite en Bois
75 W. 68th St., New York, NEW YORK (map)
nearest subway: 66th Street – Lincoln Center (1)
Jerry continues his lie about the whereabouts of his watch over dinner with his parents and Uncle Leo, and is pressed by his mother to ask out the waitress Naomi, who Jerry later discovers laughs like “Elmer Fudd sitting on a juicer.”

parked spot
New York, NEW YORK
Susan tells George that the deal is off with Jerry and George, with George backpedaling to blame the deal’s refusal on Jerry. This is same spot as where George refused the original deal in “The Wallet.”

Kramer’s Apartment
Elaine and Kramer mull over the details of their “relationship” for the benefit of Dr. Reston in Kramer’s apartment.

Russell Dalrymple’s condo
1125 Park Ave., New York, NEW YORK (map)
nearest subway: 86th Street (4,5,6)
George barges in on Russell and a date having dinner, getting the pilot back for $8000, $5000 below the original offer. This is the same building exterior as Beth’s apartment in “The Wait Out,” and Heather’s apartment in “The Chicken Roaster.”

Dr. Reston’s office
New York, NEW YORK
Kramer goes to speak with Dr. Reston, and ends up becoming enamored with him…just as Elaine meets Crazy Joe Davola outside. Kramer notices how the building is “architecturally incorrect” as the doors are designed diagonally.