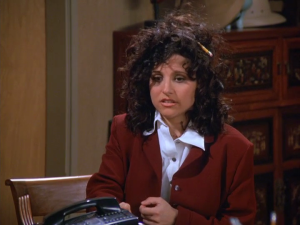 Jerry’s girlfriend seems perfect but no one else likes her. George discovers a mediocre student to be the first Susan Ross Foundation Scholar. Peterman enlists Elaine to ghostwrite his autobiography. When Peterman buys the rights to Kramer’s life stories, Elaine struggles to work with him and Kramer faces a life without his own past.

Jerry’s Apartment
George and Kramer hold an “intervention” for Jerry over dating a loser. Kramer tells his spectacular Van Buren Boys story, but is forced to come up with new life stories once he sells his stories to Peterman. George vents over having to continually give away the Ross’ money to anyone but him.

Monk’s Café
Jerry consults with George to find a flaw with Ellen – but senses something is amiss when he brings his parents in to meet her, and they love her. George talks about the possibility of having Steven Koren be like George, but only for real.

Da Silvano (NOW CLOSED)
260 Sixth Ave., New York, NEW YORK (map)
nearest subway: Houston Street (1)
Jerry and Ellen go for dinner here, on what turned out to be her birthday…making Jerry suspicious as to why she is not with friends on her birthday.

Lorenzo’s Pizza (NOT REAL)
New York, NEW YORK
Kramer almost gets accosted by the Van Buren Boys here, but accidentally flashes their secret sign. He says that their pizza, however, “was a little oily.” There is no Lorenzo’s in Manhattan, with the nearest being at 1100 South Ave. in Staten Island.

ITALY (map)
Kramer gets backed up onto a cartoon map of Italy by the tough Van Buren Boys at Lorenzo’s Pizza.

coffee shop (NOT REAL)
New York, NEW YORK
Jerry meets Ellen’s friends outside a coffee shop, where her friends profusely thank Jerry for seeing Ellen, as if it is an act of charity.

J. Peterman
Kramer sells off his entire life’s stories to Mr. Peterman for $750, which Elaine then is forced to somehow turn into Peterman’s autobiography.

VERMONT (map)
Jerry plans four days at a bed and breakfast here with Ellen, when he is intervened by George and Kramer, as he is told she’s dating a loser.

airport
Queens, NEW YORK (map)
Jerry leaves to pick up his parents, who he has flown in to meet and “review” Ellen, and ideally fly back home the same day.

Newman’s Apartment
Kramer starts to tell a story about dropping cold cuts into his foot bath, but after disgusting Jerry and Elaine, reveals he bought the stories from Newman for $8, thus the foot bath incident happened on Newman’s couch.

Universite de Sorbonne
1 Rue Victor Cousin, Paris, FRANCE (map)
Ellen mentions to Jerry and his parents that she got her Masters degree at the Sorbonne.

Las Vegas, NEVADA (map)
Jerry, already wanting to dump his current girlfriend Ellen, wonders aloud in front of his parents if his ex Amber is back from Vegas.