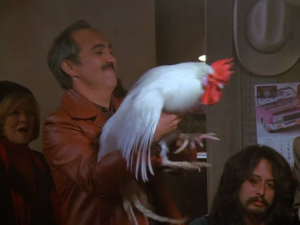 Galapagos Islands, ECUADOR (map)
“The Marine Biologist”
George tells Diane as part of his marine biologist story that he just got back from a trip here, where he was living with turtles. He later complains to Jerry “you got me in the Galapagos Islands, living with the turtles…I don’t know where the hell I am!”

ECUADOR (map)
“The Little Jerry”
Marcellino flies in a cockfighting rooster from Ecuador that “looks like a dog with a glove on his head,” with a 68-0 record, to fight Little Jerry.