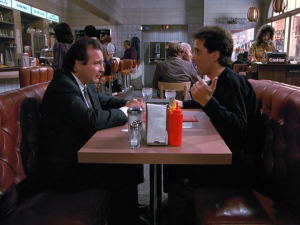 Jerry tries to “break up” with his obnoxious childhood friend but his pathetic weeping leads Jerry to give him another chance. Elaine helps Jerry come up with excuses to avoid him.

Jerry’s Apartment
Kramer inadvertently forces Jerry into a conversation with Joel Hornick, where they set a date to have lunch. Joel later shows up at Jerry’s apartment, after hanging out with Kramer.

Monk’s Café
Jerry is forced to “dump” an Joel after growing tired of his childish antics and his generally irritating personality.

Madison Square Garden
4 Pennsylvania Pl., New York, NEW YORK (map)
nearest subway: 34th Street – Penn Station (1,2,3)
George mentions he and Jerry have courtside tickets to see the Knicks, which Jerry gives away to Joel to get him to stop crying.

IRAN (map)
Proving Joel’s ignorance and self-obsessiveness, Jerry blurts out that he was invited to perform for Hezbollah at their annual summer luncheon in Iran.

Security Merchants Bank (NOT REAL)
New York, NEW YORK
George goes to the bank to deposit a giant container of change, where Jerry breaks the news that he gave away his Knicks ticket to Joel.

EASTERN EUROPE (map)
Jerry and Elaine lie to Joel, claiming they are busy later in the week for choir practice of Eastern European national anthems, “you know, with the Wall being down and everything.”

Berlin Wall
Berlin, GERMANY (map)
Jerry and Elaine lie to Joel, claiming they are busy later in the week for choir practice of Eastern European national anthems, “you know, with the Wall being down and everything.”