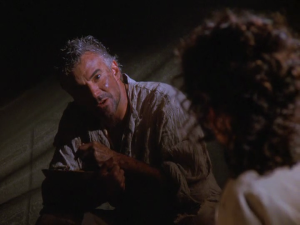 🇲🇲 REPUBLIC OF THE UNION OF MYANMAR

MYANMAR (map)
“The Secret Code”
Mr. Peterman begins to tell George about his latest trip to Burma, when he gets a call about his ill mother.

Yangon, MYANMAR (map)
“The Foundation”
Mr. Peterman suddenly escapes here since he feels fried, (“You most likely know it as Myanmar, but it will always be Burma to me!”) leaving Elaine in charge of the catalog. He is shown at the same payphone as Elaine in the deleted scene from “The Chicken Roaster,” implying he is in Yangon. Kramer, when told about Peterman: “Where? Myanmar? Isn’t that the discount pharmacy?”

Yangon, MYANMAR (map)
“The Chicken Roaster”
Elaine travels to the Burmese jungle to have George’s sable hat written off by Mr. Peterman, the “only white poet warlord in the neighborhood,” and experiences Peterman’s dementia and “the horror” first-hand. A deleted scene later on reveals Elaine is in Yangon, as she asks an operator if “there’s no J. Peterman listed in the entire greater metropolitan Yangon area?”