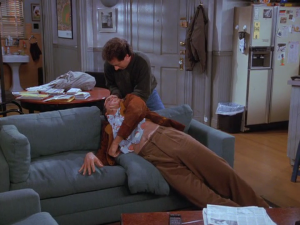 George drums up sympathy as he battles a shipwreck survivor for an available apartment in his building. Elaine dates a “bad breaker-upper.” Kramer has a bad cough that sounds exactly like a dog’s cough, so he sees a vet for the remedy. Jerry helps Newman deliver mail so he can win a transfer to Hawaii.

Jerry’s Apartment
Jerry and Newman enter an unholy alliance to deliver Newman’s outstanding mail, in the hopes he can score a transfer to Hawaii. George announces he’s getting a new apartment, but is forced to reveal the “Astonishing Tales of Costanza” in order to land it. Kramer comes down with a cough, but will only take dog pills to cure it.

Monk’s Café
Elaine reveals that Alan is constantly harmed by exes because he’s a bad “breaker-upper,” as revealed when he later points out Elaine’s big head. George meets with his parents to get a grasp on his insane childhood.

Newman’s Apartment
Jerry works out of Newman’s apartment, to help him deliver all of his old discarded mail on time, in the hopes of getting Newman a transfer to Hawaii.

Mr. Eldridge’s apartment
321 W. 90th St., New York, NEW YORK (map)
nearest subway: 96th Street (1,2,3)
George crushes Mr. Eldridge in a sympathy contest with the building’s tenant board, but loses the apartment to Alan, since he merely tips the superintendent $50. George implies this apartment is across the street from his existing apartment, when it is actually four blocks away. Thanks Erkan B. for the tip!

Nantucket, MASSACHUSETTS (map)
George is forced to fight for an apartment with an Andrea Doria survivor, which Kramer duly notes (after learning from his book “Astonishing Tales Of The Sea”) crashed into the SS Stockholm 12 miles off the coast of Nantucket on Jul. 25, 1956.

The Old Mill (NOT REAL)
100 W. Houston St., New York, NEW YORK (map)
nearest subway: Prince Street (R,W)
Elaine gets stood up due to Alan’s being stabbed, and later witnesses one of Alan’s ex-girlfriends burn him with hot liquid. Elaine eventually stabs Alan with a fork for remarking about a bump on her nose. The signage outside the opening scene shows the restaurant is called E&O (Eastern & Oriental), which has since closed; later exteriors of the restaurants are only sets. Thanks Erkan B. for the tip!

HAWAII (map)
Jerry helps Newman deliver overdue mail to help get him transferred to Hawaii, “the most sought after postal route of them all…the air is so dewey sweet you don’t even have to lick the stamps!”