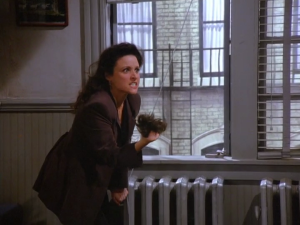 Elaine poses as a beard for a gay male friend, then attempts to convert him to heterosexuality. George wears a toupee and turns down a woman because she’s bald. Kramer makes money by posing in police lineups. Jerry must take a lie detector test to prove he’s not a fan of “Melrose Place.”

Jerry’s Apartment
Kramer decides to set up George with his old flame, Denise, as he is so striking with his new toupee. Plans are thwarted, however, when Elaine strips George of the “hat” and throws it out Jerry’s window. The gang later assembles to watch “Melrose Place” together.

Monk’s Café
George meets Denise, a woman who turns out to be bald, and rejects HIM after he loses his toupee. Jerry asks George, “one of the most deceitful, duplicitous, deceptive minds of our time,” how to beat a polygraph test. Elaine talks about her plan to “convert” Robert to the side of heterosexuality.

Metropolitan Opera
30 Lincoln Center Pl., New York, NEW YORK (map)
nearest subway: 66th Street – Lincoln Center (1)
Elaine works as a “beard” for a gay friend in front of his boss at a performance of “Swan Lake”…and later tries to get him to “switch teams.”

Las Vegas, NEVADA (map)
Jerry is asked the following “Melrose Place”-related question on his polygraph test: “Did Jane’s finance kidnap Sydney and take her to Las Vegas? And if so, did she enjoy it?”