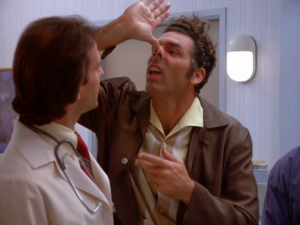 Jerry and Elaine agree to be godparents to their friends’ newborn boy. They find a shaky mohel to perform the bris. Kramer is convinced he saw a pigman at the hospital.

Jerry’s Apartment
George struggles to get reimbursed for his destroyed car, Elaine searches for a mohel for baby Steven, and Kramer finds more evidence to prove his “pig-man” theory. Stan and Myra later bring baby Steven, where they announce that Jerry and Elaine have been replaced by Kramer as “the godfather.”

St. Luke’s-Roosevelt Hospital Center (now Mount Sinai West)
1000 Tenth Ave., New York, NEW YORK (map)
nearest subway: 59th Street – Columbus Circle (A,B,C,D,1)
Jerry and Elaine are initially named godparents to their friend’s son Steven in room 1397. Kramer, trying to find the room stumbles upon room 1937, where he discovers a “pig-man,” and hears where “the anguished oink of pig-man cries out for help!” He later frees pig-man, who turns out to be a “fat little mental patient” that steals George’s 1976 Chevy Impala. A suicidal man jumps off the roof of the hospital, destroying George’s car (in the “great spot”), and George tries to get the hospital to reimburse the “living victim” of the tragedy.

Stan & Myra’s apartment
New York, NEW YORK
The gang goes to attend baby Steven’s bris, but due to Kramer’s interference and a shaky mohel, the only thing that ends up being circumcised is Jerry’s “phone finger.”