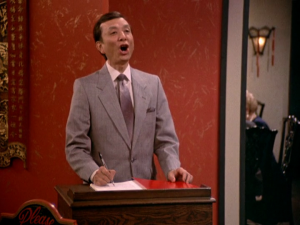 Before seeing the classic B-movie “Plan 9 From Outer Space,” Jerry, Elaine and George decide to get dinner without reservations at a Chinese restaurant. They spend the next thirty minutes trying to get seated by the enigmatic maitre’d.

Jerry’s Apartment and Monk’s Café are not featured in this episode.

Park Ave., New York, NEW YORK
The maitre’d owner says that Mr. Cohen will get a table sooner than the gang, apparently because he lives on Park Avenue and is very funny.

Boston, MASSACHUSETTS (map)
In a deleted scene, George mentions he thinks he pulled his hamstring at a hotel in Boston, due to a tight tuck: “it’s too tight, I feel like a mental patient.”

Pines Of Mar Gables, FLORIDA
Jerry mentions that his aunt will call his mother in Florida, upon realizing Jerry didn’t say hello to a mutual friend he didn’t recognize.

Sky Burger (NOT REAL)
New York, NEW YORK
Where Elaine ends up eating her dinner that night, likely devouring a burger or two after being forced to wait while starving.