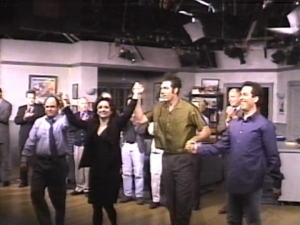 A look back at favorite moments from all nine seasons.

The Improv is not featured in this episode. Monk’s Café is only featured in clips of previous episodes.

Jerry’s Apartment
Jerry introduces a series retrospective of highlights from his apartment, as the rest of the gang yells at him from the hallway to hurry for a movie.