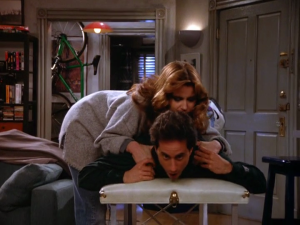 Jerry’s masseuse girlfriend won’t give him a massage. Elaine dates Joel Rifkin – not the mass murderer.

Jerry’s Apartment
Jerry complains about a lack of massages from his new masseuse girlfriend, getting so desperate he tries to forcibly receive a massage, causing Jodi to storm out in disgust. Jodi’s hatred of George ends up turning him on, as “she just dislikes me so much… it’s irresistible.”

Monk’s Café
George obsesses over the fact that Jerry’s masseuse girlfriend Jodi does not like him, which he discusses first with Jerry, then with his girlfriend Karen.

Pendant Publishing
Elaine tells her coworkers that her boyfriend’s name is Joel Rifkin, leading to jokes and cracks at Joel (the boyfriend’s) expense about the other Joel Rifkin.

IDAHO (map)
Jerry mentions to George that Jodi not wanting to give him a massage instead of sex is like going to Idaho and asking for a carrot: “I like carrots, but I’m in Idaho…I want a potato!”

Giants Stadium (NOW CLOSED)
50 Route 120, East Rutherford, NEW JERSEY (map)
Elaine, Joel and Kramer go to see the Giants host the Philadelphia Eagles. The game goes into overtime (Kramer catches the game-winning field goal ball), and Elaine finds out Joel is adopted. Kramer tries picking up tickets at will-call, but cannot get because he does not have his wallet, and thus Joel is called over the PA system, where the entire stadium hears his familiar name.

Karen’s apartment
New York, NEW YORK
George and Karen continue to fight over George’s obsession that Jodi may not like him.

SWEDEN (map)
Jerry mentions Sweden in his closing monologue, noting how the Swedish are big into getting “meat in their hands,” between the massages and the meatballs. He also notes that for a neutral country, Sweden is pretty tense, as they have a very high suicide rate.