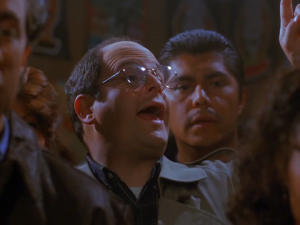 Jerry bounces a check at the local bodega and the storekeeper posts it for all to see. Kramer buys a chicken so he can produce his own eggs. When he discovers his chicken is really a rooster, he names it Little Jerry Seinfeld and trains him to be a champion cockfighter. George dates a prisoner. Elaine’s boyfriend shaves his head but realizes he’s really bald when he tries to grow it back out.

Jerry’s Apartment
Kramer announces he’s buying a chicken, but instead gets a rooster, which he introduces to and trains for the dangerous world of cockfighting. Marcellino asks Jerry to have Little Jerry throw his fight. George tells Jerry he’s dating a convict, and discovers something better than conjugal sex – fugitive sex. George chides Kurt for voluntarily being bald.

Monk’s Café
Kramer tells Jerry that his bounced check is on display in the bodega. George announces he gets to visit a women’s prison. Kramer decides he wants to eat only cage-free, farm-fresh eggs. Elaine spots Kurt, dilapidated and depressed, over permanently going bald.

Columbus Deli
476 Columbus Ave., New York, NEW YORK (map)
nearest subway: 81st Street – Museum Of Natural History (B,C)
Jerry bounces a clown check at Marcellino’s bodega, who agrees to take it down only if “Little Jerry” throws his fight. Marcellino hosts a cockfight in the back of his store at 3:30 in the morning between Little Jerry and his ringer from Ecuador.

City Trust And Savings Bank (NOT REAL)
Third Ave. and Main St, Bronx, NEW YORK (map)
nearest subway: Zerega Avenue (6)
We learn from Jerry’s bounced check that his bank is the main branch, at the corner of 3rd and Main. However, this intersection does not exist in Manhattan, with the only such intersection in New York City being in the Bronx.

women’s prison
NEW YORK (map)
George meets Celia while on a tour of the prison for a Susan Ross Foundation visit, who later breaks out to visit George.

Kramer’s Apartment
Jerry reveals to Kramer that he actually bought a rooster instead of a chicken. With this in mind, Jerry and Kramer train Little Jerry to become “a lean, mean pecking machine.”

Queens, NEW YORK (map)
Jerry mentions how George once didn’t want to date a woman from Queens because she lived “over the bridge.”

Elaine’s Apartment
Elaine convinces Kurt he doesn’t have long to live a life with hair, prompting him to propose to Elaine.

Del Boca Vista
Jerry’s parents call him, worried about money, and send him $50 because his check bounced at Marcellino’s bodega.

MEXICO (map)
The gang is seen standing in front of a poster for “Mexico’s #1 Import Beer” when awaiting Little Jerry’s cockfight at Marcellino’s bodega.

George’s Apartment
Kurt visits George to solve his balding problem…and they are interrupted by Celia, who just decided to do the “break-out pop-in” with George. Kurt is later arrested at George’s apartment for aiding and abetting a fugitive, along with Celia, as the police think he is George, as they are both bald.

ECUADOR (map)
Marcellino flies in a cockfighting rooster from Ecuador that “looks like a dog with a glove on his head,” with a 68-0 record, to fight Little Jerry.

men’s prison
NEW YORK (map)
Kurt tells Elaine he will be in prison for 14 months (10 with good behavior) for punching a cop, prompting Elaine to return his engagement ring.