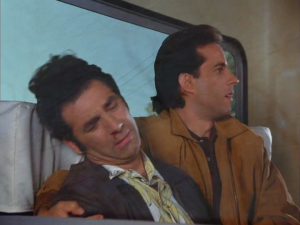 Baltic Ave.
Atlantic City, NEW JERSEY (map)
“The Pony Remark”
Jerry remarks in his closing monologue about playing Monopoly with a real pony as a playing piece, passing Baltic Ave. The streets in the American version of Monopoly are named for streets in Atlantic City.

Garden Valley Shopping Mall (NOT REAL, based on Jersey Gardens Mall)
651 Kapowski Rd., Elizabeth, NEW JERSEY (map)
“The Parking Garage”
The gang loses the car, wanders across the entire parking garage, and Jerry and George busted for “uromysotisis.” “Notes About Nothing” from the Season 3 DVD revealed this mall was based on the Jersey Gardens Mall.

NEW JERSEY (map)
“The Stranded”
George picks Jerry’s medicine choice over his, because it is made in White Plains instead of New Jersey.

Edison, NEW JERSEY (map)
“The Fix-Up”
Kramer gets a bag of free (yet defective) condoms from Bob Sacamano, who now works at a condom factory in Edison.

Palisades Interstate Parkway
Fort Lee, NEW JERSEY (map)
“The Pitch / Ticket”
Newman mentions in court that he was pulled over on his way home by the police, upset that Kramer’s radar detector failed to detect the radar. This testimony is slightly misleading, as Newman said earlier that he was volunteering in White Plains (which would not require taking the Palisades) before being caught speeding, but perhaps his details were mixed unable to keep track of his lie.

NEW JERSEY (map)
“The Pilot”
In finding out Haagen-Dazs isn’t from Denmark, TV George tells Jerry and TV Kramer it is really made in New Jersey.

NEW JERSEY (map)
“The Puffy Shirt”
Kramer mentions that Leslie has factories in New Jersey making more puffy shirts, based on Jerry wearing it on “The Today Show.”

Giants Stadium (NOW CLOSED)
50 Route 120, East Rutherford, NEW JERSEY (map)
“The Masseuse”
Elaine, Joel and Kramer go to see the Giants host the Philadelphia Eagles. The game goes into overtime (Kramer catches the game-winning field goal ball), and Elaine finds out Joel is adopted. Kramer tries picking up tickets at will-call, but cannot get because he does not have his wallet, and thus Joel is called over the PA system, where the entire stadium hears his familiar name.

Boardwalk Hall
2301 Boardwalk, Atlantic City, NEW JERSEY (map)
“The Chaperone”
In a deleted scene, Kramer warns Jerry to “stay away from the Convention Hall” after he discovers Jerry accidentally killed Karen’s birds. The Miss America 1995 competition was held here, as were all pageants since 1940.

New Jersey Turnpike
NEW JERSEY (map)
“The Big Salad”
Gendason tries to escape his arrest warrant by fleeing, with Kramer driving, off the Turnpike in a white Ford Bronco. Kramer claims that Gendason just wants to see his fish: “I’m Kramer…you know who I am, damn it!” The entire chase parodies the infamous 1994 O.J. Simpson Ford Bronco chase, which ran for 50 miles along Interstate 405 in California.

Parsippany, NEW JERSEY (map)
“The Mom And Pop Store”
Jerry discovers Mom and Pop are selling his sneakers at a garage sale in Parsippany, and buses on Bieber Tourways with Kramer to get there and take back his sneakers (a la “Midnight Cowboy”).

NEW JERSEY (map)
“The Face Painter”
Puddy claims he’s a lifelong Devils fan, growing up in New Jersey. However, the Devils only moved to New Jersey in 1982 from Denver (where they were the Colorado Rockies), so either Puddy is confused, a liar, or a lot older than he looks…

NEW JERSEY (map)
“The Hot Tub”
Mr. Steinbrenner tells George that when he used to get angry, he would tell people he was moving the team to New Jersey “just to upset people.”

NEW JERSEY (map)
“The Caddy”
In a deleted scene, Mr. Steinbrenner promises the Costanzas that he will move the Yankees to New Jersey (fulfilling his threat first mentioned in “The Hot Tub“), and name their new stadium the George Costanza Memorial Stadium, or the “Costanza Dome.”

CNBC Studios (NOW CLOSED)
2200 Fletcher Ave., Fort Lee, NEW JERSEY (map)
“The Doll”
Jerry mentions he bought a bottle of BBQ sauce for Charles Grodin with a face on the label that looked like him, to give him as a gift for his appearance on “The Charles Grodin Show.” However, it was destroyed on Jerry’s flight, thanks to Sally’s oversized package.

NEW JERSEY (map)
“The Invitations”
The stationery store clerk mentions that she would likely only have a few boxes of the invitations George picked out at a warehouse in New Jersey.

Bally’s Atlantic City
1900 Pacific Ave., Atlantic City, NEW JERSEY (map)
“The Money”
Jerry lies to his parents and claims he’s performing at Bally’s, thus having to leave. We discover that Kramer has the phone number memorized, as he “used to have a problem.”

Golden Nugget Atlantic City (NOW CLOSED)
3400 Pacific Ave., Atlantic City, NEW JERSEY (map)
“The Money”
Jerry lies again, telling his parents he has to “re-pack and go” when he books another gig at the Golden Nugget. The Golden Nugget was sold and renamed Bally’s Grand Hotel and Casino in 1987, which it stayed as until 1998, and closed for good in 2014, meaning at the time of the episode there was actually no Golden Nugget in Atlantic City (a separate property with the same name opened in 2011).

NEW JERSEY (map)
“The Yada Yada”
When Kramer rants about how dentists came to America with a dream, Jerry responds that Tim Whatley is from New Jersey.

NEW JERSEY (map)
“The Junk Mail”
Jerry announces that he will try and sell the van from Frankie to a lot in New Jersey, and invites Kramer to go with him to the lot.

NEW JERSEY (map)
“The Maid”
When Elaine gives a guy her new 646 number, he guesses that the area code serves New Jersey.

Garden Valley Shopping Mall (NOT REAL, based on Jersey Gardens Mall)
651 Kapowski Rd., Elizabeth, NEW JERSEY (map)
“The Finale”
The mall is mentioned by the security guard from “The Parking Garage” while on the stand at the gang’s trial, bringing up Jerry and George’s “uromysotisis” charges.

New Jersey Turnpike, Exit 14
Newark, NEW JERSEY (map)
“The Over-Cheer”
Jerry is seen driving down the Turnpike in the rain into New York City, in his AMC Pacer, on his way to pick up George.

MetLife Stadium
1 MetLife Stadium Dr., East Rutherford, NEW JERSEY (map)
“The Over-Cheer”
When George comments how he can’t believe that the Super Bowl is in New York, Jerry angrily replies, saying “well, they gotta have it somewhere!” The Seattle Seahawks ended up defeating the Denver Broncos 43-8 at MetLife.