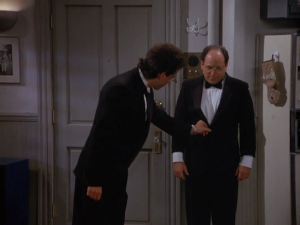 Elaine realizes her boyfriend Joey is actually Crazy Joe Davola. She, Jerry, George and Kramer have to endure a night at the opera with a bunch of clowns.

Jerry’s Apartment
The gang readies for a wild night at the opera, with George wearing a short tuxedo and Kramer dressing like Ozzie Nelson. Jerry also fears for his safety after getting the kaibosh put on him by Crazy Joe Davola following a threatening phone message.

Crazy Joe Davola’s apartment
New York, NEW YORK
Joe tortures Jerry over the phone, threatening to put the kaibosh on him. Joe later reveals his “shrine” to Elaine, who sprays him with Cherry Binaca and escapes before he gets his hands on her.

ITALY (map)
Kramer tries convincing Jerry that people in Italy sing to one another instead of talking, and thus why opera is so popular (“its the language Jerry…the language!”).

Central Park
New York, NEW YORK (map)
Crazy Joe Davola is walking through the park on his way to The Town Hall, when he’s accosted by a group of punks, that he beats up mercilessly.

Tunis, TUNISIA (map)
Mr. Reichman mentions to his wife that Steven Holtzman did a production in Tunis last year that “the Muslims really took to,” while passing George scalping his opera ticket in the street.

airport
Queens, NEW YORK (map)
Susan makes it to the opera at the last minute, telling George she didn’t have to pick up her friend at the airport because her plane had to land in Philadelphia.

Philadelphia International Airport
8800 Essington Ave., Philadelphia, PENNSYLVANIA (map)
Susan makes it to the opera at the last minute, telling George she didn’t have to pick up her friend at the airport because her plane had to land in Philadelphia.

2 thoughts on “The Opera”