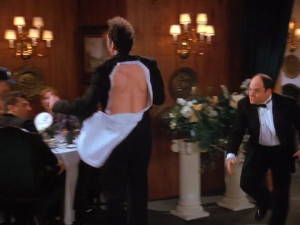 Elaine’s co-worker calls her Susie by mistake but Elaine pretends to be Susie to protect her reputation. Kramer sets his watch an hour ahead. George avoids his girlfriend because he suspects she’s about to break up with him and he wants her to help him make a great entrance at the Yankee Ball. Kramer places bets on Jerry’s behalf with Mike Moffitt, who thinks Jerry is a murderer.

Jerry’s Apartment
Jerry accidentally breaks Mike Moffatt’s thumbs outside the building, and agrees to let Mike fix his car in exchange for clearing his bookie tab, which Kramer started on Jerry’s behalf. George reveals his plan to avoid Allison until the ball…but has to deal with Kramer, something of a “surrogate” girlfriend.

Monk’s Café
George reveals his plan to have his date, Allison, “twirl” at the Yankees ball, so he can finally make a great entrance.

JAPAN (map)
When George asks the gang how much he could theoretically make as a gigolo, Elaine asks whether in America or Japan, as the Japanese are more enlightened, and “can see beyond the physical.”

J. Peterman
Elaine gets into trouble with Peggy, who constantly assumes she is named Susie. Elaine, Peggy, Mr. Peterman and “Susie” end up getting into a major dispute, with only one resolution for Elaine: get “rid” of Susie.

Staten Island, NEW YORK (map)
When Jerry says Elaine could pass for a Sharon, rather than a Susie: “What am I? A bulimic, chain-smoking stenographer from Staten Island?”

Tavern On The Green (NOW CLOSED)
67 Central Park W., New York, NEW YORK (map)
nearest subway: 72nd Street (B,C)
The Yankees hold a ball there, where George struggles to get Allison to come…and ends up inadvertently using Kramer to make a great entrance, by twirling him.

George’s Apartment
Allison tries dumping George, who tries delaying the break-up until the ball. George uses his infamous Greatest American Hero “Believe It Or Not” answering machine voicemail to avoid her.

Costanza House
George ends up sleeping here when ditching Allison at his apartment.

Madison Square Garden
4 Pennsylvania Pl., New York, NEW YORK (map)
nearest subway: 34th Street – Penn Station (1,2,3)
George’s girlfriend Allison gets Kramer Knicks tickets through her job against the Pacers, but Kramer gets kicked out (along with Spike Lee and Reggie Miller) for running onto the court and throwing a hot dog at Miller.

strip club
New York, NEW YORK
Kramer mentions that he, Reggie Miller and Spike Lee visited a strip club together, after being thrown out of the Knicks game.

OTB Off-Track Betting
New York, NEW YORK
Kramer encourages Jerry to ride their gambling high by betting on horses, but believes that they are closed, as his watch is set to run an hour ahead of standard time.

Allison’s apartment
305 W. 18th St., New York, NEW YORK (map)
nearest subway: 14th Street (A,C,E)
Kramer tries getting Knicks tickets against the Rockets (“that Hakeem Olajuwon, he’s got a real attitude!”) from Allison, but ends up acting as a middleman between her and George, even taking George back on her behalf.

funeral home (NOT REAL)
New York, NEW YORK
Elaine is forced to make an awkward eulogy for Susie at her “memorial” service, where Mike Moffatt reveals Jerry and Elaine as her “killers,” and both Peterman and Jerry both admit to torrid love affairs with the dearly departed.