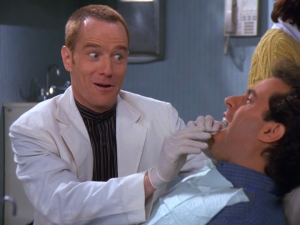 George’s girlfriend uses the phrase “yada yada” instead of completing her sentences. Dr. Tim Whatley infuriates Jerry when he converts to Judaism for the jokes. Kramer and Mickey go on a double date. Elaine botches the chances of her friends adopting a baby. Debra Messing, Robert Wagner and Jill St. John guest star.

Jerry’s Apartment
Jerry reveals his suspicion regarding Whatley’s conversion, causing Kramer to chide Jerry for being a “rabid anti-dentite.” Kramer and Mickey fight over who to date when they pick up two women, and Mickey eventually proposes to one, just as Beth Lookner announces her second divorce, due to Elaine getting their adoption rejected.

Monk’s Café
Tim Whatley announces to the gang that he’s Jewish, but Jerry is suspicious that he is angling for complete joke immunity. George’s new girlfriend repeatedly says “yada yada,” which he discovers entails a lot of major details. Elaine is berated by Beth Lookner’s new husband for wrecking their chances at adopting.

health club
New York, NEW YORK
The newly-Jewish Tim Whatley jokes that he just came from a “Jewish workout” of sitting in the sauna, sparking Jerry’s suspicion of his true conversion intentions.

Gap (now Banana Republic)
2373 Broadway, New York, NEW YORK (map)
nearest subway: 86th Street (1)
Kramer mentions how he and Mickey picked up two women at the Gap, without deciding who would date who. The closest Gap to Kramer’s Apartment was at this location.

Bloomingdale’s
1000 Third Ave., New York, NEW YORK (map)
nearest subway: Lexington Avenue – 59th Street (N,Q,R)
Marcy reveals she stole a Piaget watch, and then got a massage and facial on the 5th floor, and skipped out on the bill: “I was on Third Ave., minding my own business, and yada yada yada, I got a free massage and a facial.”

Bruno (now Club A Steakhouse)
240 E. 58th St., New York, NEW YORK (map)
nearest subway: 59th Street (4,5,6)
Kramer and Mickey take out Karen and Julie on a double-date, and struggle to break off with an individual girl. Kramer and Mickey return for a second date, fighting their way to the table who sits with which woman.

Manhattan East Dental Plaza
225 E. 64th St., New York, NEW YORK (map)
nearest subway: Lexington Avenue – 63rd Street (F)
Jerry visits the newly-Jewish Dr. Whatley, who defends his repeated use of Jewish jokes so quickly into his conversion. This is the same location as the “Manhattan East Medical Offices” from “The Fusilli Jerry,” but the building name and address were altered.

POLAND (map)
Jerry believes if Dr. Whatley, now a convert to Judaism, also gets Polish citizenship, “there’ll be no stopping him!” joke-wise.

Seattle, WASHINGTON (map)
Marcy mentions to George how her ex-boyfriend came over before moving to Seattle, and yada yada yada, she’s really tired.

Karen’s apartment
New York, NEW YORK
Kramer goes to visit Karen, and discovers that both of her parents are little people.

NEW JERSEY (map)
When Kramer rants about how dentists came to America with a dream, Jerry responds that Tim Whatley is from New Jersey.