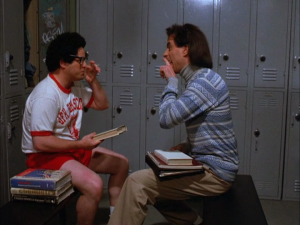 BOROUGH OF THE BRONX

John F. Kennedy High School
99 Terrace View Ave., Bronx, NEW YORK (map)
nearest subway: Marble Hill – 225th Street (1)
“The Library”
George tells how he got Mr. Hayman fired after he gave George a wedgie in class, and we also discover Jerry gave George the book in gym class, and George is ultimately responsible for its loss. We originally see George wearing a JFK High shirt in gym, but the show typically implies they are both from Queens, and George even once says in “The Nose Job” that he is from Long Island. There is also a JFK High at 75-40 Parsons Blvd. in Kew Gardens, at 3000 Bellmore Ave. in Bellmore, and 50 Kennedy Dr. in Plainview).

John F. Kennedy High School
99 Terrace View Ave., Bronx, NEW YORK (map)
nearest subway: Marble Hill – 225th Street (1)
“The Outing”
Where the story of George falling on Jerry’s head in gym class happened, which was the catalyst for their friendship and part of their story to Sharon the NYU reporter.

City Trust And Savings Bank (NOT REAL)
Third Ave. and Main St, Bronx, NEW YORK (map)
nearest subway: Zerega Avenue (6)
“The Little Jerry”
We learn from Jerry’s bounced check that his bank is the main branch, at the corner of 3rd and Main. However, this intersection does not exist in Manhattan, with the only such intersection in New York City being in the Bronx.

Bronx, NEW YORK (map)
“The Serenity Now”
When George asks if Jerry wants to remove a screen door at his father’s house in Queens, Jerry sarcastically replies that he’s already removing another screen door in the Bronx.