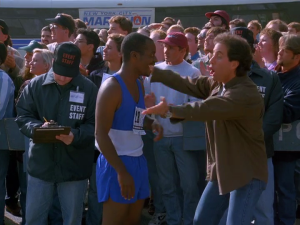 Verranzo-Narrows Bridge
Staten Island, NEW YORK (map)
“The Hot Tub”
Jerry drops off Jean-Paul here at the start of the race, the starting point each year for the New York Marathon. Jean-Paul runs the Marathon, and is en route to victory when Kramer accidentally hands him coffee, which he throws on his face and burns himself.

Staten Island, NEW YORK (map)
“The Invitations”
Jerry argues to George that it’s a lot easier to blend into a sea of people on Staten Island than China, when George contemplates escaping there to avoid Susan. He eventually decides that can’t work, because he wouldn’t be able to take his clothes with him.

Staten Island, NEW YORK (map)
“The Susie”
When Jerry says Elaine could pass for a Sharon, rather than a Susie: “What am I? A bulimic, chain-smoking stenographer from Staten Island?”