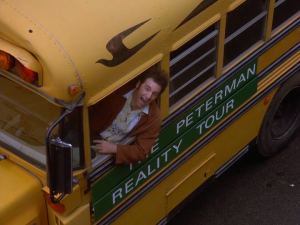 Jerry’s Apartment
Jerry reveals to Kramer that he shaved his chest, but Kramer warns him against the dangerous of long-term chest shaving. Elaine tells Kramer she published his stories in Peterman’s biography…and thus, Kramer unveils his “Peterman Reality Tour,” and begs Jerry to come along to generate buzz.

Monk’s Café
Jerry discovers that George is wearing the tourist’s clothes, and George reveals to Mary Anne that he wants to “move” to New York. Elaine reveals to Mr. Lippman here, in exchange for a cut of his profits, the secret to ensuring a high quality muffin top: bake the full muffin, then “pop the top, toss the stump.”

Walker St., New York, NEW YORK (map)
George uses his touristy map to track down Walker Street, as he has an American League meeting there.

Waldenbooks (NOW CLOSED)
461 Park Ave., New York, NEW YORK (map)
nearest subway: 59th Street (4,5,6)
Kramer tracks down Mr. Peterman at a signing here, to “do his part” as the “real Peterman” and sign books by his side.

Little Rock, ARKANSAS (map)
George pretends he is a visitor from Little Rock to go out with Mary Anne, working for Tyler Chicken and owning a three-legged dog, Willy. He is infamously relieved of duty by the Yankees when “traded” to Tyler Chicken in exchange for all-chicken concessions at Yankee Stadium.

Central Park
New York, NEW YORK (map)
Jerry and Alex stroll through the park, where Alex divulges on the benefits of hairless animals.

Top Of The Muffin To You! (NOT REAL)
511 Amsterdam Ave., New York, NEW YORK (map)
nearest subway: 86th Street (1)
Mr. Lippman turns Elaine’s idea for a muffin-top-only retailer to life, and cuts her in for half the profits in exchange for revealing her secret to baking the perfect muffin top. Thanks to eagle-eyed fan Bilita Mpash for catching the lighting store through the door across the street, which was located at 510 Amsterdam Ave. (and is now Kitaro Sushi), putting the muffin shop at around 511 Amsterdam.

George’s Apartment
George “moves” into his place again to fool Mary Anne, who thinks he’s being ripped off on rent and that the place smells like the last tenant had monkeys.

W. 85th St. and Columbus Ave., New York, NEW YORK (map)
nearest subway: 86th Street (B,C)
Kramer is seen driving The Peterman Reality Tour bus southbound down Columbus Avenue, crossing West 85th Street, pointing out to his riders that they can see his bedroom window on their right (“it’s the one that’s covered in chicken wire”). This is partially plausible, as the bus would pass West 81st Street, but Kramer’s Apartment is still 300 feet westbound from Columbus, meaning that in a moving bus it may be tricky to catch – although the chicken wire surely helped! Thanks to Bilita Mpash for the catch!

Jiffy Dump (NOT REAL)
NEW YORK
Kramer tries to dump his muffin stumps here, but is refused by the same snarky Jiffy Park attendant from “The Wig Master.”

P&G Café (NOW CLOSED)
279 Amsterdam Ave., New York, NEW YORK (map)
nearest subway: 72nd Street (1,2,3)
George mopes over his job loss, and runs into the tourist whose clothes he has stolen. He is later spotted by Mary Anne in the bathroom, only in his underpants. George mentions to Jerry that the bar is on 43rd St.

2 thoughts on “The Muffin Tops”