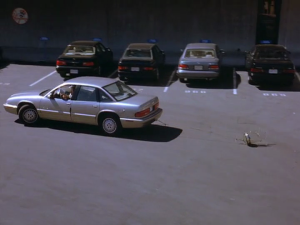 “The Letter”
Nina gets Elaine, George and Kramer Yankees tickets in the owner’s box for a game versus the Orioles, but Elaine is ejected for wearing an Orioles cap, and Kramer gets hit by a foul ball. Elaine later goes to a game with Mr. Lippman, and is tossed by security for again wearing the Orioles cap.

“The Opposite”
George gets a job as Assistant To The Travelling Secretary for the Yankees from George Steinbrenner directly, after harshly criticizing him and the Yankees while utilizing “the opposite.”

“The Chaperone”
George, while talking to Danny Tartabull in the locker room, decides the Yankees should wear cotton unis instead of polyester. Later, he convinces manager Buck Showalter to switch jersey materials.

“The Pledge Drive”
George tries to pitch to Mr. Morgan on having a Yankee at the PBS pledge drive Jerry and Kramer are volunteering at.

“The Mom And Pop Store”
George tries to pitch having “Jon Voight Day” at Yankee Stadium, along with “Joe Pepitone Day” to Mr. Morgan…and when he’s shunned, he tries suggesting “Liam Neeson Day.”

“The Secretary”
George holds interviews for his new assistant, where he hires Ada over a more attractive woman. However, George ends up sleeping with Ada, and agrees to give her a raise during intercourse.

“The Race”
George’s coworkers suspect he is a communist…”causing dissent, stirring the pot, getting people to question the whole rotten system.” George is later commended by Mr. Steinbrenner, for George’s capacity to recruit communist players from Cuba.

“The Jimmy”
Mr. Wilhelm calls a big meeting to address employees stealing equipment…where George sweats through the entire thing, making him a suspect. George gets caught sweating over his kung pao…because “George likes his chicken spicy.” George uses doublespeak with Mr. Steinbrenner, referring to himself in the third person (like Jimmy) to avoid any punishment for his accusations.

“The Diplomat’s Club”
George tries getting a picture with Mr. Morgan, but offends him for saying he looks like Sugar Ray Leonard. George later brings in Karl from Defend Exterminators because he’s black, to try to prove his racial unbias to Mr. Morgan.

“The Postponement”
George comes up with the idea to extend the bathroom doors at the stadium all the way to the floor. Jerry loves the idea, but Susan callously wants George to “change the subject,” causing him to rethink his engagement proposal.

“The Hot Tub”
George is penned a rage-a-holic by Mr. Wilhelm, giving him the Houston Astros assignment. George is eventually made to soak in a hot tub with Mr. Steinbrenner to “relieve” his tension.

“The Secret Code”
Kramer praises his own traffic navigation skills, claiming he once got from his apartment to Yankee Stadium during rush hour in 15 minutes.

“The Caddy”
George accidentally locks his keys in his car, leaving it at the stadium for almost a week…ending up with disastrous (and “fatal”) results.

“The Calzone”
George gets the duty of getting Steinbrenner a calzone every day, but then runs into a problem when he is banned from the calzone place. Mr. Steinbrenner tears George’s office apart looking for calzones…and then decides to heat players’ uniforms in pizza ovens before games “to keep those muscles loosey-goosey!”

“The Bottle Deposit”
George is given a “special” assignment by Mr. Wilhelm, the details of which he does not even hear. The assignment gets mysteriously done, but ends up having George tossed into a mental hospital.

“The Invitations”
In a deleted scene, Elaine tells George she won’t attend his wedding as she is dateless and not in the bridal party, but is interrupted by Mr. Steinbrenner, who forces himself on Elaine as her date, warning George that if she does not go with him, then George will be fired from the Yankees.

“The Little Kicks”
Anna, late for work, says she got held up…and Elaine assumes it was at Yankee Stadium, with George.

“The Fatigues”
George checks out his Risk Management book-on-tape, shocked to hear the voiceover reader sounds just like him. George ends up doing a speech on Ovaltine, and why it should be called Roundtine…instead of Risk Management, after his notes from Abby get switched with Bania’s.

“The Checks”
Kramer takes his new Japanese friends to the stadium to run the bases, but due to rain, George has them watch the “Jerry” pilot instead in his office.

“The Abstinence”
George teaches Bernie Williams and Derek Jeter how to use physics to properly hit home runs, as he is now a physics expert due to his abstinence.

“The Comeback”
Reilly zings George on eating too much shrimp, putting him on a mission to get him back with a good comeback.

“The Nap”
Tired from watching “The Omen” trilogy, George discovers he can nap under his desk. He has Jerry’s contractor Conrad deck out the desk to make it extra comfy, but the jig is up when Mr. Steinbrenner crashes his office. Jerry calls in a bomb threat to free George, only in exchange for fitted hats for every person in the stadium on Hat Day…and later for advance calls to ticket-holders in the event of a rain delay.

“The Millennium”
George meets great difficulty in getting himself fired, breaking into the Hall of Pride, staining Babe Ruth’s jersey, streaking on the field and driving the World Series trophy through the parking lot.

“The Strike”
George claims that thanks to his good rapport with the grounds crew, he was still able to get Dr. Whatley Yankee tickets as a Hanukkah present.

“The Finale”
Mr. Steinbrenner is seen leaving his office for the gang’s trial in Massachusetts.